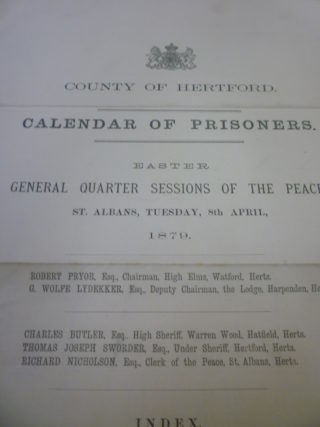 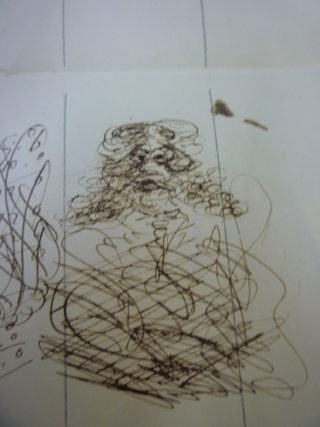 Drawing of the judge at the Assizes (by a bored clerk?) 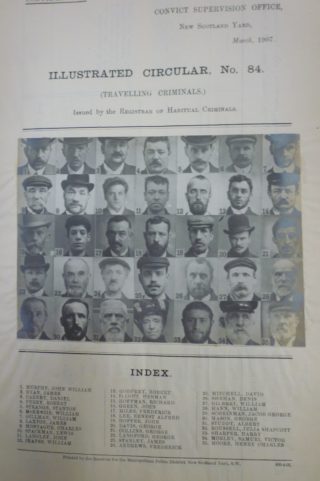 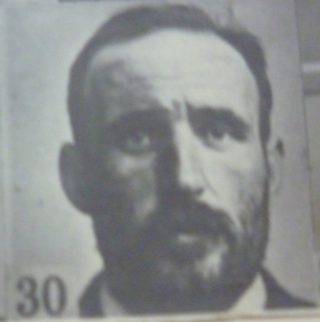 The recent additions to Hertfordshire Names Online come from the Calendars of Prisoners appearing at the  Assizes.

Whilst not everyone wants to discover a criminal ancestor, it is worth noting that the names also include the victim of the crime and many of those brought before the Assizes were discharged.

A case of “some sensation”

One such was Theodosia Annie Noel who appeared on 27 January 1879 accused of the manslaughter of Emmanuel Charles Noel at Barkway.  The Morning Post  covered the story as the case “had excited some sensation in the county on account of the position of the defendant who is the wife of a gentleman possessed of considerable property”. Theodosia had been charged with the manslaughter of her son through starvation and neglect. (Emmanuel’s birth was registered in the June quarter of 1878 at Royston).  Theodosia appeared at the Assizes on 27 January 1879 but, as the Hertfordshire Mercury reported, the prosecution were in some disarray as the principal witness, Mrs Nugent, was ill and the doctor who carried out the post mortem had gone abroad. She was bailed to appear at the next assizes on 21 July 1879.  However she did not attend.  The clerk to the court explained that she was in Liverpool and so advanced in pregnancy that it would be dangerous to her life if she were to appear and undergo the excitement of a trial.[1]  Theodosia appeared at the Hertford Assizes on 22 January 1880.  The judge’s opinion was that no case had been made and she was discharged.

A life of crime

Many of the defendants were not from Hertfordshire.  Someone who was found guilty was a Thomas Atter, a deserter from the Royal Artillery from Great Gonerby in Lincolnshire.  He appeared before the court in July 1847 accused of inflicting grievous bodily harm and theft on John Salmon.  Find My Past (free to search for those with a Hertfordshire Library card) revealed that he was baptised on 23 September 1824, the son of Richard and Elizabeth.  He had a previous conviction for theft at Sleaford and was sentenced to life imprisonment at Hertford Assizes.  He offended again. The British Library newspapers online include The Standard  which reported on a murder at the convict establishment at Portsmouth in June 1848.  Thomas Atter was committed at the Petty Sessions held at the Star Inn, Gosport, to Winchester Gaol to be tried with the murder of a prison guard.  He was found guilty.  As to the victim of the Hertfordshire assault – did he survive?  The answer is that he did.  The 1851 census recorded John Salmon, a butcher, lodging in the household of Frederic Machon, a Hawker at Barley.  Also living there were Frederic’s three children, with the surname of Trigg and Sarah Trigg whose relationship to the head of household was described as “Concubine”.

Scotland Yard produced a regular Illustrated Circular of Travelling Criminals.  Some of these are held at HALS (OFF ACC 922 – Illustrated Circular 80 -100).  Not only do these include a picture of the criminal but also a description and a summary of their crimes.  Some of these had appeared at the Hertfordshire Assizes.  One such was George Steadman who was found guilty of theft on 16 November 1901.  The circular noted that he also went under three other aliases.  He was born in 1867, 5 feet and three and half inches tall, had a fresh complexion, brown hair and hazel eyes.  His favourite crime was to target a house near some building works and, posing as the clerk of works, would ask the occupant for change of a sovereign so that he could pay the workmen.  On receipt of the silver he would quickly disappear without handing over the gold.

A familiar name in Hertfordshire folk lore also appears in the Calendars.  Ebenezer Fox and his twin brother, Albert, have been recorded as likeable poachers.[2]  It is, however, worth recording that Ebenezer was 25 when tried on 5 August 1884 and already had 24 previous convictions for poaching and assault.  This appearance at the Assizes was for ” Violently assaulting and ravishing Clara Bonfield at Stevenage”.  He was found guilty of rape and sentenced to 10 years penal servitude.

[1] The family had property in Liverpool.  The 1881 census recorded Theodosia at Toxteth Park with her husband, Charles, and their three children.

[2]  Notably by Reginald Hine in his Hitchin Worthies.