You are here: Home>Blog>‘Special Moments in Time’ Exhibition at North Hertfordshire Museum 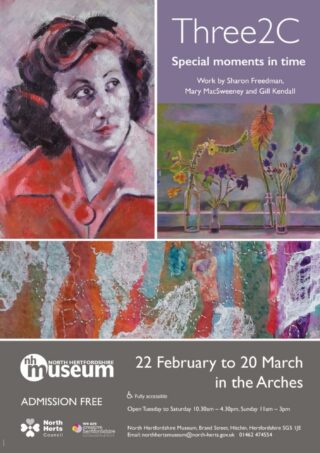 Sharon Freeman showcased a collection of oil paintings featuring flowers and landscapes, a few of the latter in watercolours. ‘Snow Dog Kennel Farm, Charlton’ had a relaxing minimal colour pallet with bursts of playful red that captured the coldness of the winter scene. This was similar to ‘Snow Charlton,’ though the latter twinned and opposed the warm sunny hues of ‘Tees Valley near High Force.’ Two large canvases showed eye-catching vibrant and joyful flowers on a windowsill. Freeman’s collection of oil paintings was accompanied by three watercolour landscapes; ‘Country Durham Landscape,’ ‘Oughtonhead’ and ‘Barton Hills.’

Where Freeman focuses on nature, Gill Kendall created portraits. The influence of old black and white photographs the artist mentioned was evident in her paintings. They were built from tones and shades more than hues, though most portraits featured the appearance of a colour. ‘Three Mums To Be’ is especially prominent with colour. ‘Lupins’ is the most circular and round of the series. The faces are brought to life in a very realistic style, ‘Mum and Auntie June’ could be mistaken for a photograph, though the clothing is often done in a more impressionist style.

The third artist moves away from the traditional fine art styles entirely. Mary MacSweeney works with wool to create her art. This medium, used to create beautiful poppies and a stunning hare reduced to a silhouette by the setting sun, was my favourite in the portraits of sheep and dogs. The 3D elements brought the animals to life with texture and softness.