You are here: Home>Blog>Hertfordshire’s Picture Palaces — On Display at HALS 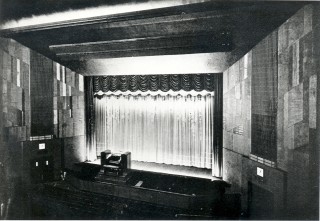 Did your town have a classic Art Deco cinema that’s gone now? Or is it one of the lucky few towns where this gem has been lovingly restored and reopened?

HALS currently has a display up celebrating Hertfordshire’s Picture Palaces, from Baldock to Watford and from Harpenden to Bishop’s Stortford — including the ones I have fond childhood memories of, the Waltham Cross Embassy and the Hoddesdon Pavilion. Most are long drowned under the tide of multiplexes, but a few (notably the Berkhampsted Rex and the St Albans Odyssey) still show films.

These weren’t just functional spaces to show films, though, as modern cinemas are. They were often beautiful works of Art Deco design, and many of them put on live shows and organ recitals as well as their regular programmes.

In addition to the main display, there’s also a feature on the long controversy over Sunday opening of cinemas, From the 1930s to the 1950s, by which time Sunday opening had become a regular thing, towns held a series of votes on the matter. Many Hertfordshire towns were strongly in favour, but Watford voted against the change for some time.

The display can be seen for a few days more in the HALS foyer at County Hall, Hertford, but if you can’t make it before it ends, don’t despair. The material that makes up the display can all be found in the archives, along with images, documents and general information about all aspects of Hertfordshire’s rich history.