You are here: Home>Blog>Radical Utopia — A Talk on Britain’s Second Garden City 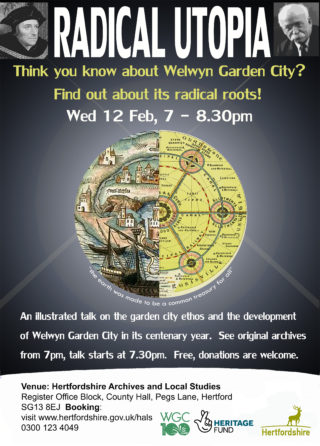 If you live in Welwyn Garden City, you can’t fail to have noticed that 2020 is the centenary of its foundation. Numerous events are scheduled to celebrate the anniversary — but this is of far more than just local interest.

The Garden City movement, founded by Sir Ebenezer Howard, differed from the later utilitarian New Towns in being a radical utopian vision of how people should live. Intimately associated with the Arts and Crafts movement, who ethos was that everything we use should be beautiful or useful (or preferably both), Howard’s idea was for an urban environment that people could take both pleasure and pride from, designed as a contrast with the dehumanising nature of the city environment.

The first fruit was Letchworth Garden City, founded in 1903, in which Howard’s optimism and idealism had free rein. The search for a site for a Second Garden City began soon afterwards, with Knebworth an early option, before the outbreak of war put everything on hold.

Knebworth was no longer available after the end of the war, but Howard managed to acquire land between Welwyn and Hatfield, which was designated as Welwyn Garden City, and the Second Garden City Company was established in 1920. A more practical and down-to-earth mood was in the air by now, but nevertheless the Second Garden City still embodied Howard’s original ideals.

As part of the celebrations, HALS is offering an illustrated talk on the ethos and development of Welwyn Garden City in its centenary year. This is free to attend, and you’ll be able not only to listen to the talk, but also to examine the documents held in the archives about the establishment of WCG.

The talk will be on Wednesday 12th February 2020, from 7-8.30pm, at HALS, County Hall, Hertford. It costs nothing to attend, but you’ll need to book your place on the Eventbrite page, as a high demand is expected.

Whether you live in Welwyn Garden City or interested in the history of progressive town planning, or simply want to know more about a chapter of Hertfordshire history that’s of international importance, this is a perfect opportunity to learn more.