You are here: Home>Herts history>Topics>The Word is Hertfordshire!>Thousand years of the written word>18th Century>1727: The Siege of Gibralter - An Eyewitness Account 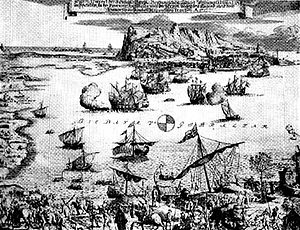 Gibraltar has been under British control since at least 1713 when the Treaty of Utrecht, signed between France and the victors, Britain and her allies, brought an end to the War of the Spanish Succession.  The treaty ceded Gibraltar to Britain in perpetuity and stipulated that there should be no overland trade between Spain and the colony unless there was an emergency.  Spain was not very happy about this arrangement and over the years she attempted to force the British to return the ‘rock’.  In 1727 Spain attempted to achieve this by a siege which prevented any supplies getting through by sea.

Despite overwhelming odds in their favour (contemporary reports cited up to 25,000 Spanish soldiers against no more than 5,000 British troops) the Spanish gave up after an expensive siege.   There is nothing which brings such military events into human focus as a personal report and the Hertford archives are fortunate in containing such an eye witness account.[1]

The writer of these communications is John Beaver, who seems to have had a role or position which gave him insight into the political and military activity from the British side. He writes to a ‘Moody’ with the declared intent to give his friend an accurate view of the siege (although he takes the opportunity to remind him that “a dozen linen shirts” have gone astray).

The siege itself lasted five months.  During this time the British divert themselves with taking an interest in North African politics just across the Mediterranean.  Beaver talks about two situtions, the first of which is a local dispute:

But let us leave Spaniards in their trenches and look into Barbary [modern Morocco], the seat of war and confusion.  There are two contenders, Mulley [Mullah][2] Ahmad in possession and Mulley Abdalmalik endeavouring to get the crown. Mulley Ahmad is an indolent inactive  prince given up to pleasures especially drinking, the abomination of all true Mahommetans, … and seldom stirs abroad … One Kerr, a scotch renegade, is his chief engineer.

The second conflict he describes is the battle for the rule of the country. Not surprisingly the canny British support both sides

On the coast there are two Pashas making war … We receive every week letters from both giving an account of their success and both send letters as they endeavour to persuade us from the emperor, confirming them in the government … As tis not our business to fall out with either because both can be very serviceable to us in our present condition, we compliment both on their victories and assure them of our inviolable friendship and assistance. They want arms and powder, we want … cattle so we keep up the dispute and get what we want from both, and indeed if it were not for them this place had been in all respects in a miserable condition.

The correspondence also records the difficulties which might accompany diplomacy when it can take days to get from the seat of power (Madrid) to Gibraltar and there are no phones or even telegraph to keep the besieged British aware of progress.

Since Major Sowles was sent express to Madrid which is about eight weeks ago we have had three letters from him, the first gave only an account of his arrival there with the news of Ccount Rotenberg’s coming to Madrid in order to mediate an accommodation between the … princes … the second tells us the ill success of his negotiations that the King of Spain was inflexible … [the Count] would take his leave and return to France. … The third letter … which bears the date the seventh of November acquaints us that  [with] ... the dispatch of the first courier the Spanish court had thought first to make new proposals to the allies … we don’t know what they contain. Our consul at Madrid Mr Heine says that he cannot answer they will be absolutely received but that they lay a good foundation …  As to raising the siege of this place they say tis only a matter of time here … we are in the most intolerable situation of life that can be, tied up by the articles of our cessation from working and repairing our fortifications and closely blocked up by their trenches which we could easily demolish if my lord was not strictly enjoined by the King [George] not to give the Spaniards the least occasion for revising of hostilities.

So it seems they are stuck.  The British government are determined to adhere closely to the terms of the Treaty so that they do not give the Spanish any excuse to say that they have forfeited the ownership of the Rock.  However, it seems there is some trading going on as their “store of all sorts [is] more abundant and our fortifications better than at first”.

But all is not well – “the men die apace and that part of our defence diminish apace”.   The other concern that both sides experienced is a continuous desertion to and from each army.

Their desertion has been incredible when the Count de Montemar came to the command he thought to put a stop to it by patrolling with horses in front of their works, but the cavalry came off as fast as the infantry who have had no less than seven of them within a few days and the sergeants who are placed sentinels where private men used to keep guard,  desert to us very fast … Believe me dear Moody if the remains of their army stay here this winter they will have good luck.

So in conclusion these few letters are full of interesting insights into the siege and the politics which surrounds this fraught period in Anglo-Spanish relations.  They are well worth a read.