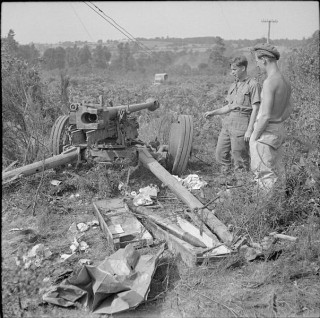 In position just south of LE-PLESSE GRIMAULT {Le Plessis Grimoult?} with Mount Pincôn directly behind.  The long Artillery duel which led up to the crossing of the river NOIREAU is on.  The weather continues to be extremely hot & sultry.  Columns of dust from the main road attract enemy shells, but we have no more incidents.  During the night other Arty: units pass through our position and we appear to be the most rearward Field Regt.

Another day like yesterday darkened by the news that L/Bdr Ingram’s brother has been killed in a tank battle.  The O.P. tank was hit by an 88mm shell.  His Troop Comdr, Capt Cherry (now Adj) was wounded & evacuated.  We expect to move forward tomorrow as the front make progress.

Another hot dusty day which began peacefully and ended tragically.  Recce went off at 0500 hrs in a heavy mist.  It was still quite misty when the Battery moved at 0730 hrs and went into action in rather an exposed position with the guns on the reverse slope of a hill.  Behind us on top of the crest were filed guns in an even more exposed position.

We are in action about an hour when we have to move forward once more to keep the retreating enemy in range.  Another exposed position north of the village of PROUSSY.  The area is close to some cross tracks which the enemy has used as  a machine gun nest.  It has been hurriedly evacuated, dead Germans and abandoned equipment lie in the slit trenches.  We are glad of the slit trenches!

We had not been there an hour before a few Stray H.E shells land slap on the gun positions.  G. Sub having a very near miss.  A few more shells land slap on B Troop position, one lands alongside H. Sub., killing Gnr Roberts before he had time to take cover in a trench.  He was buried at 1700 hrs in the Dev. cemetery alongside the main axis of advance, and in the shadow of Mount PINCÔN.  Lt. Treble joined the Battery to-day having been injured in a motor cycle accident just before ‘D’ Day.  He brings the optimistic rumour from Capt. Q that the war will be over in a fortnight, some fortnight!  The enemy seem to have pulled back and we have a quiet night.

The weather continues to be hot & sultry, and a recce party from the 64th Medman Regt. arrives with the information that they are moving into our gun position this afternoon.  This is the first news we have had that we are to move on.  Our recce parties are at PROUSSY at mid-day and we are shelled, we pass through the same place or ruins of it, and approach our new position down sunken lanes and through the yards of burning farm buildings. Abundant equipment and dead Germans are to be found in the lanes and hedges everywhere the evidence of terrific bombardment.

We are keeping up with the retreating enemy and have a scare as we are recording Zero lines.  Thunderbolt fighters roar down on the Regtl Area and some bombs are dropped on the road near 342 Battery.  There is a dash for yellow smoke & yellow strips.  Other circling planes keep us apprehensive. The advance is going so rapidly that it is difficult for pilots to keep abreast of ground movements.

In the late afternoon the Regt. Is ordered still further forward.  We make a long cross-country journey through dusty cornfields and occupy a position just north of Conde.  {Condé-sur-Noireau} An assault crossing of the river NOIREAU is being planned and we are to fire a smoke screen to cover the high ground beyond the river.  The enemy can overlook our position but as the Area is so crowded with Artillery we have to make the best of our exposed gun-site.

We hear that the Canadians have broken out of CAEN and made a great advance down the east bank of the river NOIREAU.  It cannot be long before the disordered enemy is completely driven out of Normandy.

The enemy is still throwing shells back at us and the village of PROUSSY but it is nothing compared with the many shells we are sending over to him from the massed Artillery.  We have a few targets but the smoke screen is not called for, the advance is going better than planned. Bdr Bond (coverer for F. Sub) is unlucky enough to be wounded in the leg & arms when a shell bursts over the fighting compartment.  Whether it was a premature or a shell hitting a tree no one is quite sure.  Bdr Bond is evacuated, not to return to the Battery untill after VE day.

* The date in the diary reads 14th, but it’s clear from the sequence that this entry refers to the 11th.