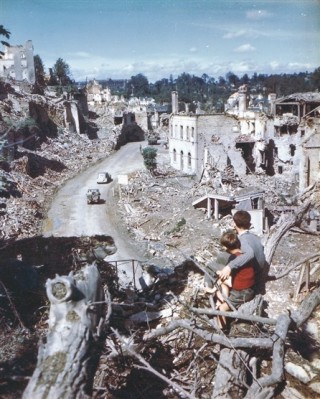 Regiment still at BELLE EPINE, makes preparation to move.  OP’s return lines seeled {sealed} in and ammo handed over to 14th Field Regt.  Full day maintenance and packing.  In the midst of those preparations machine guns open up in the woods in front of us, and bullets whiz low over the gun area.  We man our weapon pits, grasp rifles and wonder if an enemy patrol has broken through.  Telephone lines buzz and Capt Doney leads small patrol into the woods on recce.  For an indomitable 15 mins Battery area is swept with fire then all was quiet.  Later learn that First Royal Tank Regt were exercising their guns in the woods and we were getting their richochets. {ricochets}  Breathe again and incident makes good story when recounted to our friends in the residue who arrive in the morning having left England on D+36. {12th July?}  They have many tales to tell us of narrow escapes from V1’s and exciting times in the Channel.  They bring our NAAFI rations with them, writing paper is very scarce and there is some competition for the 8-9 writing pads.  In the afternoon recce parties depart to a new gun area and we are warned to move tomorrow.

hot dusty day for move.  The tanks travel across country via special tank tracks marked with white tape.  The route takes us through Tilly, across open corn fields, through orchards and down twisting sunken lanes, across streams and main roads, past knocked-out tanks and dead cattle ruined farm houses and over gun-positions of neighbouring Regts.  Our route is plainly marked by a trail of dust which goes drifting across the scorched Normandy countryside.  One can be excused losing ones way in such conditions and explains why the soft vehicles who left after the tanks, arrive sometime before the guns.  Our new Battery area is in the middle of a large open cornfield with not a shred of cover for miles.  In this area just S.E of Fontenay LA PESNAL are parcked  {parked} more guns than we have seen the whole of the campaign  We are only 100 yds away from two groups of the 116th Field (of 59 Div who we are now supporting.)  We learn the enemy is less than 2500 yds away and despite blistering hot sun we dig in frantically fast.  Amm – 500 rounds per gun was already in position when we arrived but it all had to be dug in and prepared for tomorrows fire plan.  We are so cramped that ’A’ Echelon is placed 300 yds in front of us. ‘B’ Echelon is in the village of DUOY ST. MARGUERITE.  In the evening Major Corke and Capt. Wood from the Northants Yeomanry. at AUORIEN in preparation for the dawn attack tomorrow.

Dawn came in quietly under cover of thick mist and we awoke to find in the cornfield all around us Sherman & Churchill flame-throwing tanks waiting silently for the attack.  They belong to the 33rd Armoured Brigade, we are supporting 59 Div in the attack on NOYERS station which bars our way to VILLIERS BOCAGE from the East.  The attack began at 0530 hrs when the air suddenly became alive with shells from massed guns.  A colossal barrage.  In the first 2 hours we fire 1500 rds from the Battery and the noise is terrific.  Eat our breakfast as we fire.  firing continues all day.  By tea time have expended over 2000 rds and by midnight total expenditure is 3370 rds. Cordite fumes swirl around the guns and in the evening hangs low over the ripening corn.  A very hot tiring day unrelieved by any good news.  117 Brigade on our left had a very bad start when 12 Shermans ran into a cunningly concealed minefield.  Despite this they reached their objective but were too weak to hold it, were counter attacked before they could consolidate and were driven back almost to where they started.  197 Bgde. On the right reached the station and church at Noyers after some bitter fighting but owing to the failure on the left had to withdraw again to prevent exposing themselves to a flank attack. At 11pm just after it had really got dark the whole area was raided by a single German bomber.  Bombs & flares were dropped over CAEN on our left.  AA fire was terrific and we lay in our slit trenches watching the pattern woven by the tracer shells.  Anti Personell {Personnel} bombs and oil bombs are scattered over the area but fortunately none near us.