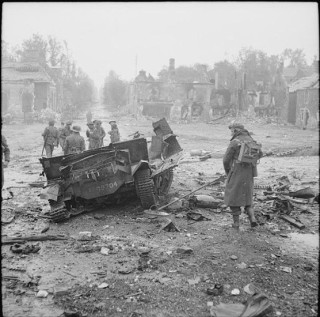 A very sad day for the battery.  The enemy occupy Tilly St Pierre Cristol  and Lingreves with the Panzer Lehr Div. waiting south of Tilly.  In the morning 50 Div. put in a large scale attack on Tilly.  The 6th  7 9th D.L.I attack west of Tilly supported by an artillery barrage.  We fire 250 rds per gun.  In the middle of the barrage we hear the radio report that Capt Hall and L/Bdr Mitchley are wounded at the D.P.  Then comes the message that “21’s Sunray has had it.”   mourn the loss of “A” Troop Commander. L/Bdr Meyer and Gnr Frost help to carry back Bdr Mitchley who is evacuated to base.  The attack fails.  Jerry counter-attacks.  Fighting goes on well into the night with Jerry still in possession of Tilly.

Things are fairly quiet after yesterday’s strain.  We clean our guns and try to get some rest.  We fire on some enemy tanks in harbour {resting} at LINGREVES.  After the heavy infantry casualties yesterday our infantry spend the day re-grouping.

Still at the Jerusalem x roads with the enemy in Tilly, St. Pierre, Crissat and Lingreves. {Lingèvres?}  49 Div. attacked Crislot supported by a barrage.  We fire   We fire 144 rds per gun.  The D.L.I.  {Durham Light Infantry} attack and advance 2 miles west of Tilly.  Total expenditure for the day 1147 rds of H.E.  No letters to-day, held up by essential supplies, but each man receives 5 cigarettes as a personal gift from Monty to the 50 Div.  At night a very heavy AA barrage, enemy planes flying low, at least two shot down near us.

Another quiet day as infantry regroup.  intermittent  mortaring of our front line areas and we hear that Lt. Col. Fanshawe has been wounded in the hand by mortar splinters.  Some more re-inforcements arrive and we listen eagerly to their stories about home.  Disturbed about Buzz-bombs. {V1s}

Sunday and relatively quiet.  We fire 500 rds, mainly harassing and counter Battery tasks.  Manage a trip into Bayeaux, visit Cathedral and see replica of famous tapestry and the very ornately carved pulpit.  Sample the wine and some get carried away and back.

Hard and exciting day firing Stonk* after stonk with wireless open all day.  By tea-time have fired 1050 rounds and during we fired over 600 more.  The reason is an unsuccessful attack on Hottot {-les-Bagues?} with a fierce enemy counter attack.  Major Swan, B.C {Battery Commander} of 342 killed in action at O.P. {Observation Post}

The struggle for Tilly & Hottot becomes more fierce.  We fire 1350 rds during the day, in which Tilly changes hands several times but by the end of the day our troops are in possession.

Up in morning early and the Battery moves to its new position – ‘ A; Troop in a small orchard with ‘B’ Troop in front in an exposed {position} in a corn field.  ‘B’ Troop hide their Sherman and command Post in an artificial copse prepared by L/Bdr Lathwell.  Battery Command Post established in a barn with an emergency C.P dug 6ft deep.  Rest of the day quiet.

* Stonk  A certain pattern of fire on and round a target.