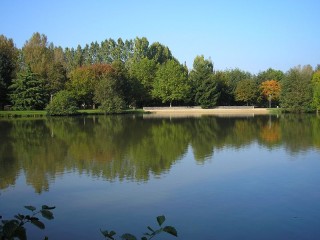 The tension of the last few days is relaxed when we hear that we are to have two days rest.  The enemy has been driven across the river NOIREAU into the Falaise Gap and we are going to join in the chase on the other bank.  We move back in high spirits keeping a wary eye on the mines which scattered everywhere.  We have a grand view of the river ONDE & NOIREAU one of the beauty spots of France.  The rest area is in some quiet orchards near the main road and we bivvy down beside our vehicles thankful not to hear the gun-fire and the smell of sickly cordite fumes.

Our 2 days rest lasts exactly 20 hrs.  We join the 11th Armoured Div: to chase the enemy in the Falaise Gap.  Recce parties moved at 1300 hrs to recce the route to FLERS as the bridge at CONDE is not yet completed.  The C.O.24 runs over a mine and is severely wounded in the leg.  The recce party makes a long detour held up by mines and blown bridges.  After a 4 hr journey the Recce arrives in FLERS to see the tail of the Regt disappearing east out of the town.  The bridge at CONDE has been opened and the Regt has come the quickest way.  The guns are in action laid out by compass before the recce party catches up.

In FLERS we have our first taste of liberation and understand something of what we have been fighting for.  All the tiredness and fatigue, all the casualties we have suffered seem worth while when we see the ecstasy and pure joy on the faces of the French people newly liberated from the enemy.  Old & young men women & children are waving flags & shouting & singing, all struggle to shake the hand of Tommy.  The strain of the fighting drops from our minds & bodies.  Moral goes up 200% and we throw away our sweets & cigs ___ ……

In action just north of FLERS, but not for long.  The Falais Gap is rapidly becoming the F. Sack. and everyone is on the move.  Advanced parties move at 0800, by 10.00 hrs the Regt is in action just west of BRIOUZE.  The position is very good plenty of room in wide fields  and good cover.  Other 25pdr Regts already in action near us and under the trees & hedges we find stacks of German amm. & Rocket bombs.

Major Scammel has become Second in Command, to replace Major Morgan Smith who was evacuated yesterday.   Capt Perry goes to 342 Battery as B.C. & Capt (now Major) Benson assumes command of ‘B’ Troop.  He sees his Troop for 5mins before dashing away to join the 15/29th Hussars who we are supporting.  We watch their tanks (Cromwells) go racing down the main road through BRIOUZE while others go chasing across our gun position, by-passing Briouze to the north.

Advanced parties go off almost as soon as we are in action, but the whole column comes to a halt for about 4 hours. The Americans who are advancing rapidly on Argentan fro the South West have advanced so quickly that they have cut out our centre line.  The British 11th Armoured is held up by a couple of American M.Ps who claim they have to keep the road open for U.S troops.  The matter takes a little sorting out, but by 1500hrs the 11th Arm. resumes its advance along the centre line, the U.S troops having come too far North.

There is tremendous congestion on the road, so swift is the advance and it takes a considerable time for the Regt to pass up the column on this long march.  On either side of the roads we see knocked out German tanks & vehicles, the remnants of the proud 7th Army, knocked out by our Typhoons & shelling.  We are catching up on the enemy and buildings are still burning where the{y} then tried to make a stand.

It is almost midnight before the guns reach the new area S.E. of ECOUCHE.  The advanced parties were only kept awake by studying the stars while they patiently waited 5 hrs for the guns (& food) to arrive.  It is almost 2 am before anyone got a meal and many could not face the prospect of M & V. at 2am & went to sleep instead. except the unlucky night-duty men who have to fire some harassing fire until day break.