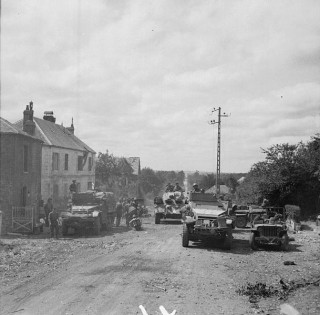 We did not move until mid-day, which gave us a little time to recover from yesterday{‘s} tiring march.  This time we move on to southern outskirts of the town of ECOUCHE itself.  The team has been badly battered by shells & bombs & we have some difficulty in negotiating the piles of rubble.

The two gun positions (A & B Troop) are in exposed fields with the Battery C.P. in a small quarry about 40ft below ground level.  Between this quarry & the town was a much larger quarry which became the hiding place of the whole Regimental wagon lines.

We were very interested to find that the town itself was occupied by a brigade of the Free French Armoured Division.  They had been in occupation for almost a week and had suffered some casualties when the town was bombed by Allied aircraft.  They were very well established in the town, being on very good terms with the local people.  We understand why they were called the Free French.!  In the evening two of the French soldiers  approached B Troop C.P and asked us to warn our sentries not to disturb them in the bushes!  Rain however, the first for nearly a fortnight put a damper on our feelings & our rejoicing.

I blush to record that B Troop, owing to an error in the Command Post, fired 60 degrees off the line.  We calculated however that the rounds (3rds G.F) must have fallen amongst the Germans opposite the American front, who probably thought they were surrounded & gave themselves up.

We get sudden orders to move in the morning.  The C.P.O decides to take his tank on the advanced party and dashes off in fine style determined not to be late, alas, he forgot to unfasten the canvas covering the Battery C.P. and dragged it after him out of the quarry!  With the calmness born of long patience the C.P.O.A’s restored order as though this sort of thing happened every day.  We were due north from Ecouche into some open ground fringed with orchards.  We have just time for a meal when we move on again.

The Col: gives the order “Move independently” and there is a grand sight as 6 columns of guns charge across country, all converging on one narrow road, the road to Argentan. Our guns area is in open fields about 3 miles west of Argentan whose ruined skyline we can just see over the rising ground.  Away to the north / are wooded hills where we watch our Typhoons circling & diving.  Columns of smoke rising to show where they have “killed” another vehicle or dump.  There is no firing to be done and it occurs quite peaceful in the open fields untill {until} drenching rain drives us into our bivouacs.

It is still raining heavily in the morning as we pack up & prepare to move again.  We are ready to move on by 0845 hrs but it is 0945 before we are on the road owing to traffic congestion.  Just as the last vehicle in the Regt gets on the road, the head of the column in Argentan is halted at the Brigade Start point.  We wait nearly 3 hrs in the pouring rain, surveying the ruins of what was once a beautiful old-world town.  G.I. Joes pick their way over the rubble and the inevitable Jeeps dash around. splashing us with water coloured brick red from the pitted road.

At midday we move on again  only to be pushed off the road a few miles further on while more tanks go through.  We finally occupy positions west of EXMES but our targets are all out of range and we quickly move on again.  We get a terrific reception from the village of Exmes before getting into our final position for the night West of CROISSILLES. {Croisilles, Orne, Lower Normandy}.

The command Post & wagon lines are well established at a large farm & the hospitable farmer & his wife, to say nothing of his daughters, distribute as much cider & Calvados as we can drink.  There are many refugees from Croiselles living in this farm.  Eggs & butter were welcome additions to our Compo.

The advance continues, this time without the rain.  We move first to a position N.E. of the village of LE ‘MERLERAUT.  It is in large open pasture land, the grounds of a modern Chateau which was formerly a Nazi SS Headquarters.  “A” Troop and the Battery Command Posts are in the area of one of the farms belonging to the Chateau.  It was waiting for the 2nd i/command to finish his recce that the advanced party is given a ‘Rocket’ from a Brigadier for not deploying the Regt.  The chase goes on and we have our fastest move of the campaign.

The route is changed while we are on the move and we catch up with the Advanced Parties.  We are held up only once when some snipers in a wood cause us some trouble and the local French Maquis warns us of mines.  At last after a week of moving down lanes we come to the main road to L’AIGLE and we make rapid progress.

We have a grand welcome from the town of AUBE-SUR-RJE (?) {probably Aube-sur-Rille} before going into action just south of it facing towards L’AIGLE,  The Battery C.P. finds another hospitable farmer & his wife.  This farmer turns out to be a very active member of the French Maquis and is most willing to co-operate.