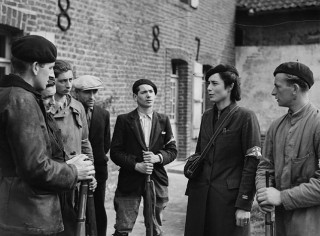 We come out of action.  No one is quite clear what is happening, but later we learn that the 11th Armoured Division are being kept rested for maintenance and replenishment.  There is talk of a dash to the Seine.  We settle down to the routine of maintenance that we learnt at St. ANDRE our first rest area, and prepare to make ourselves comfortable.

There is a great rejoicing when we hear that Paris has been freed by her own citizens and the French Armoured Div..  A great day for France and freedom everywhere, and our good farmer kills the fatted calf in our honour.  He is so pleased & proud to have us that he keeps inviting his friends to come & be introduced.  We learn they have been supplied with arms by parachute.  He also told us how the Maquis in the neighbourhood had been shot by the retreating Germans.

We are getting ourselves more comfortably established.  Gnr Dyson fitted up a bath (if you can call it a bath).  It consists of a large farm tub behind a canvas screen.  You can get inside and get a jolly good bath, but it’s a little difficult to get out.  Sgt Hicks has now acquired another German motor-cycle combination, and makes the air hideous as he runs round the Battery area.

Another addition is a German half track, it becomes a bone of contention, no one being able to decide whether it would make a good mobile Command Post or an Officers Mess.  In the end we begin to convert it into a C.P., wondering if the Div: Commander will allow us to keep it.  We begin preparations for an inspection by the C.R.A and we make friends with our neighbours the 13 RHA living in the fields between us and the town of AUBE.

Still in the rest area just south of Aub-sur-Rile {Aube-sur-Rille} and a few miles from L’AIGLE.  For a few days we remain in this quiet back water while the tide of war surges on.  Paris has fallen and a new Army from the Mediterranian {Mediterranean} is advancing, swiftly up the Rhone valley driving towards the Belfont Gap and the Swiss frontier.  Everywhere in central France the Maquis are rising and disarming the dis-organised enemy.  To the north of us the Canadians are approaching the coast at LE HAVRE.

In the meantime we rest, clean and repair our vehicles.  We receive two new S.P’s in replacement of two that have done good service.  It is not all work and some of us are lucky enough to get into L’Aigle where wine is freely distributed.  The local French had hidden these stores of wine in the river and to-day, feeling quite certain the enemy will never return, haul out the casks & bottles and rejoices in traditional style.  The town has suffered quite badly from shell fire and the church has many scars

The morning is spent in preparation for the CRA’s {Commander Royal Artillary} inspection.  Looking bright & gleaming in the sunlight our vehicles look as if they had just come off the production lines.  The proccedings {proceedings} are enlivened somewhat when a burst of bren gun fire startles everyone.  At first snipers and an ambush are expected untill we see the red face of the bren gunner who thought the trigger was dirty!

Some of us in the afternoon take time off and have a swim in the river RILE {Rille} which flows through AUBE.  One approaches the river through the local electricity works badly damaged by shell fire & sabotage.  A mined 88mm gun on the road side is a reminder that there is such a thing as war.  Someone finds an old rowing boat made for four but somehow or other 20 men get in with much pushing with the result that many duckings take place.

The Regt. is placed under a moments notice to move and we spend the whole day packing & standing by.  An unpleasant day.  We finally re-pitch our tents & wait for tomorrow.  The only interesting things to look at are the hundreds of vehicles of all descriptions which go roaring past our area.  There is something big in the wind but we hear only rumours.