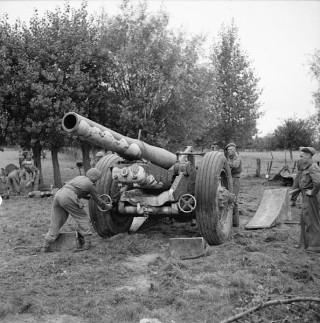 The fifth anniversary of Britain’s entry into the war.  And what an anniversary!  The most tiring and exciting day of the war.  Our advance continues with leaps and bounds as we go in & out of action in record time.  Just before mid-day the Regt is held up while passing through the town of AVELIN.

Enemy infantry & tanks are hiding in the woods on either side of the road and ambush the column after the leading tanks have passed through.  A fusillade of shots rang out, and a line of 73 tonners carrying ammunition & petrol burst into flames. Our Battery Commander, Major Corke, dashes back down the column to warn the Battery of danger.  As he passes a blazing truck the ammo explodes.  Major Corke is killed instantly, his driver Gnr Brown was blown through the windscreen and his hand was severed at the wrist by shrapnel. Gnr Mandell, the signaller has an amazing escape.  His seat is smashed to smithereens yet he escapes with shock & minor injuries.

Meanwhile, in the town the Battery goes into action in the streets as “Tank Alert” is signalled.  Sgt. Couzins with “E” sub-section is ordered forward with his S.P to recce a position and establish himself at the north end of the town.  Turning a corner he sees down in the valley to his right, an enemy 6 gun Battery in action.  “E” Sub immediately engage their No 1. Gun. over open sight, with their third round they knock out the enemy gun.

By this time the Regt is in action south of the town and E sub is called back to join the Troop in action.  While this was going on the burning trucks close to the open area were still cascading exploding ammo. Major Scammell of 342 Bty takes an S.P. into the wood & shoots up the H.Q. of this enemy pocket hidden in a chateau and bags 4 Officers & 87 O.R’s as prisoners.

British & enemy wounded are lying on the roadside being treated by ambulance men as we prepare to continue the advance.  After 2 hours we do, giving the burning vehicles a wide berth.  Just as well we did as we pass below the skyline.  No sooner did we set off than the German tanks on the opposite side of the road opened up.  They had kept quiet during our mopping up and their presence was unsuspected.  Any vehicle that went near the crest was fired on.

The C.O. orders 342 Bty into action just below the crest, and they fire a smoke screen while the rest of the column dashes past.  The whole exciting affair was a very creditable performance.  Undoubtedly the skill & coolness displayed by everyone in the sudden emergency saved many lives & vehicles in the column.  Sgt Couzins was Mentioned in Dispatches for his action on this day. (Major Scammel. M.C. Sgt – 342. MM.).

We are now catching up with the enemy and prisoners are an embarassment {sic}.   Some are wounded & we have to carry them all the way on our own transport.  At 2 pm 1200 hrs, we cross the French – Belgium frontier.  A great occasion & the joy of the people reaches new heights.  Now we know why we are called the British Liberation Army, the people are overjoyed.

As we journey on through Coutrai  & Tournai we have a confused picture of frantically waving men, women & children, all with eager  arms outstretched to touch a Tommy.  Gay flowers, vivid reds & yellows are tossed onto the tanks  fruit, tomatoes, biscuits & bottles of beer are thrown up & skilfully caught.  In Normandy it {was} “Ciggarett for Papa” but here in Belgium the people are giving us cigarettes!  Whenever a vehicle stopped the crowd surged forward and swarmed all over, & babies would be held up to be kissed by a Tommy.

On & On we race in a mad dash through Belgium.  Its every man & vehicle for himself, no speed limits.  Towards nightfall we begin to look anxiously at our petrol supplies & watch our overheated bogie-wheels.  The great question is, can we make Antwerp to-night?

Darkness falls and weary eyed we follow the vehicle in front.  There is confusion in some towns where collaborators are being rooted out.  Furniture is being dragged out into the streets, and burning buildings give a bizarre effect to our vehicles racing through.  Patriots add to the confusion by firing small arms into the air.

It comes on to rain, and we finally get orders to harbour for the night in a large open field just south of ASSCHE.  { ASSE?} Away to the South West a great blaze lights the sky.  It is the Palace of Justice at Brussels set on fire by the Germans before the town was liberated by the Guards Armoured Div:  it is well after midnight before we are resting.