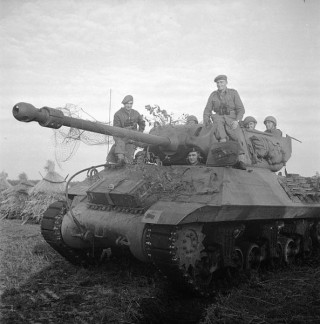 At dawn we are on the move again.  We pass through Assche {Asse?} at the same time our leading tanks enter Antwerp.  The 15/19th Hussars who we are supporting were ordered to guard the western approaches to Antwerp as it is thought the Germans cut off at the coast may attempt to break through.  We go into action near LUBBECKE and all our Brens & tanks are sighted facing west.  Flat dyke land here, cultivated and split into allotments.

Lt. Kilbraier goes back to last nights harbour area and he & Gnr Edwards bring back 3 Germans.  They are searched amid a curious throng of soldiers & civilians, and we stare in amazement at the thousands of Franc notes taken from their pockets.  Between them they possess nearly a million French Francs!  We are rather astonished to see the Belgiums patting the Germans on the backs and even shaking hands with them!  There may have been something in the prisoners story that they were Greeks!

We spend the night in LUBBECKE before moving to the outskirts of WILLIBROEK.  During the night a D.R {Dispatch Rider} of the Regt is shot by some Germans making their way through our lines.  The Regt occupies an allotment area to the west of the town and were given a riotous reception by the people.

A curious incident happened which revealed the fuel shortage in the neighbourhood .  The area was dotted with thick posts stuck into the ground as anti-glider precautions.  As soon as we arrived the people swarmed all over the fields sawing down the posts and carting them home for firewood.  Many disputes arose over the ownership of the posts and we were sometimes called to act as Solomon!  Later when all the posts were sawn off, others came and spent long hours digging up the stumps.  We are given a respite by being allowed to maintain ourselves at half strength, and half the Battery has a drink in the local inns & houses.

Still at Willebroek.  The Battery C.P. {Command Post} have a comfortable time in the house of a collaborator.  Plenty of Nazi emblems & literature Strewn all over the place.  The day is spent in cleaning ourselves & equipment.  Just as we don our glad rags to go out for the first time in months, we get the order to move.  That night we entered Antwerp and went into action on the southern edge with our guns trained over the city centre.   We managed to accomodate {sic} ourselves in houses, once homes of Nazis and have a comfortable night.  It seems strange to have civilians living normal lives alongside us.  There is a battle going on in the northern suburbs of the city as our troops try the {to} cross the Albert Canal.  The enemy is firmly established in the factory buildings.

We fire several times during the day and the battle still goes on north of Antwerp.  Our firing breaks many windows in nearby houses.  However this does not prevent us making friends with the people, and everybody soon organizes a place to get his feet under the table.  We have come to the conclusion we like the Belgiums.  In the evening we are allowed out to see the city, and have an interesting time learning about the occupation & liberation.  The shops are closed but most cafés were open.  Nearly all the windows carried bills printed in English  “The Belgium people are grateful to  their British & American liberators”  People are dancing & drinking, yet less than a mile away, across the canal we could hear the viscous rattle of machine guns & the sudden rush & bang of an 88 mm Shell, and the whine and bang of our shells going in the opposite direction.  A dance is being arranged for the troops on Saturday.  Through the streets raced a lorry from which men of the Communist Party were throwing bundles of the first edition of the first free newspaper published in Antwerp since the occupation.