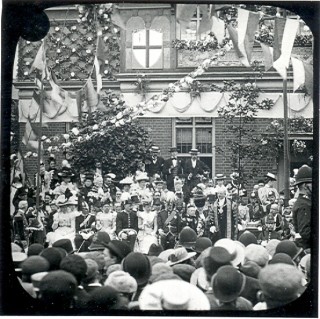 I presided over a meeting held at Cowbridge Hall, when Mrs Graveson delivered a lecture on Tobogganing in Switzerland.

At 3pm took place the opening ceremony of the new Joint Isolation hospital for Hertford and Ware – built at a cost of £6417.0.3 with £620 compensation to the tenants of the site.  Dr J A Turner the Medical Officer for Health for the district read some extracts from the Architects account.  It is perhaps lucky that the Architect was not there otherwise we might have been afflicted with a long paper more statistical than interesting.

At the borough sessions there was only one case.  John Caines was summoned under the Food and Drugs Act for adulterating milk with water.  He was fined 10/- and Public Analyst’s fee of 15/- and costs 13/6d.  His defence was rather an amusing one.  His cow was a young one and produced milk and water!  But the Bench did not quite take that in and so he was convicted and fined as above.

Mrs Graveson gave a lecture before the Hertford Literary and Debating Society on Pictorial Posters.  She speaks well and made the subject interesting.

Visited Mrs Wodehouse’s sale of work at the Town Hall for distressed clergymen’s widows and daughters and was persuaded to buy various articles I did not require.

Presided at a meeting of the trustees of Noble’s charity and distributed about £50 to the householders and lodgers in All Saints parish.  The charity dates from the time of Charles II.

A Bazaar for the Hertford Catholic Schools was opened this afternoon by Lady Edmund Talbot.  The stalls were well stocked with artistic articles far better than the usual run of such affairs.  Mr Maffia presided over a fortune telling doll figure which was very accurate in the information it gave.   I was let into the secret of its working but very few present had any idea how it was done.