The Last Years of Arthur Capel 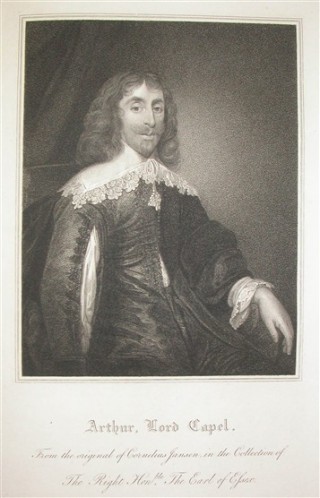 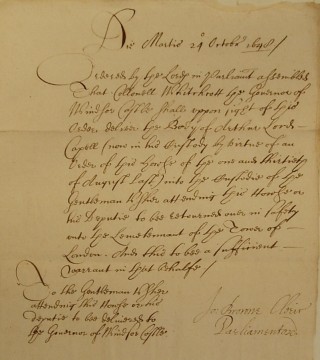 Order for Removal of Arthur Capel to The Tower

Following the surrender of the Royalist forces, Baron Capel accompanied the Prince of Wales to Jersey. He later left to attend the King who was by now a prisoner in Hampton Court but still hoping to return to power. This resulted in Capel becoming involved in conspiracies surrounding the Second Civil War. After an un-successful Royalist Rising in East Anglia, he was captured at Colchester in August 1648. He was imprisoned first in Windsor Castle and subsequently in The Tower of London.

The letter below relates to the transfer of Lord Capel from Windsor to London.

To listen to the audio clips, click play on the bar below the first image on the right.

Ordered by the Lords in Parliament assembled that Collonell Whitchrott the Governor of Windsor Castle shall upon sight of this order deliver the body of Arthur Lord Capell (now in his custody by virtue of an order of this howse of the one and thirtieth of August last) into the custodie of the Gentleman Usher attending this howse or his deputie to be returned and in safety unto the Leiuetennant of the Tower of London.

And this to be a sufficient warrant in that behalf   To the Gentleman Usher attending this Howse or his deputie, to be delivered to The Governor of Windsor Castle. HALS Ref: M224

Capel escaped from the Tower but was re-captured and sentenced to execution on 8th March 1649. On the eve of his execution he wrote to his wife as follows:

My dear life, my greatest care in relation to the world is for thy dear self. I beseech thee again and again, moderate thy apprehension and sorrows for me, and preserve thyself to the benefit of our dear children. I pray remember that the occasion of my death will give me more cause to celebrate my memory with praise rather than to consider it with sadness. God hath commanded my obedience to the fifth commandment and for acting that duty I am condemned. I shall leave thee my dear children; in them I live with thee, and leave them to the protection of a most gracious God.

Taken from Hertfordshire and the Great Civil War by Alfred Kingston, 1894