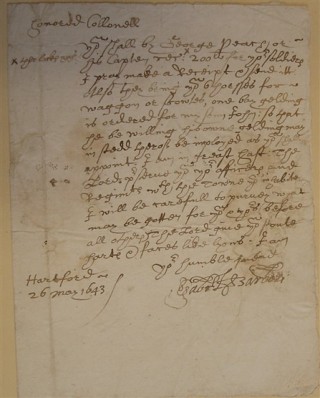 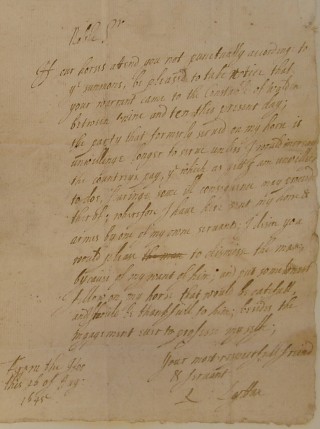 By 1643 Sir John Wittewronge had been made Colonel of the First Hertfordshire Volunteer regiment. The troops under his command were by this time at Aylesbury and badly in need of money and supplies. Between April and May 1643 Hertfordshire had to find no less than £2849 – nearly £250,000 today – for their pay, the amount mentioned below being just a part of this total. To add to this, horses were always needed and often in short supply. The numbers required could be substantial: at the battle of Cropredy Bridge in 1644, the King’s Army had nearly 4000 horse, while the Parliamentary forces under William Waller had at least 2500. Other horses were required to carry baggage and pull guns, and it is easy to see why it soon became hard to find enough animals to work the land. The situation was so desperate that as early as 1643, at Sandon, horses were literally taken out of the carts while in the process of bringing in the harvest.

The cost of providing for the soldiers at Aylesbury fell to the Hertford Committee. Gabriel Barbour, successful merchant, businessman, staunch Parliamentarian and Chairman of the Committee writes as follows:

(To listen to the audio clip, click play on the bar below the image on the right.)

You shall by George Peach or his captain receive £200 for your soldiers. I pray make a receipt and send itt. Also ther being your 6 horses for wagon or scowtes, one bay gelding is reserved for my sonn John, so that, he being willing his owne gelding may instedd therof be imployed as you shall appoint. I am in great hast. The Lord preserve you, your officers and regiments with the towne you inhabit. I will be carefull to procure what may be gotten for you and yours before all others. The Lord give you stoute harts and faces like lyons.

I am your humble servant      Gabriel Barbour

Unrest over the supply and levels of pay were to continue throughout the war as this second letter from Roland Lytton to Alban Coxe, written 2 years later clearly shows.

Noble Sir,   If our horses attend you not punctually according to the summons, be pleased to take notice that your warrant came to the Constable of Walden in between nine and ten this present day; the party that formerly served on my horse is unwillinge longer to serve unless I would increase the countreys pay, the which as yet I am unwillinge to doe, fearing some ill may proceede thereof; wherefore I have here sent my horse and arms by one of my owne servants; I desire you would please to dismisse the man; bycause of my want of him; and put some honest fellow on my horse that would be carefull and should be thankfull to him; besides the ingagement ever to professe myselfe;

Your most respectfull friend and servant