Anxious to be Home 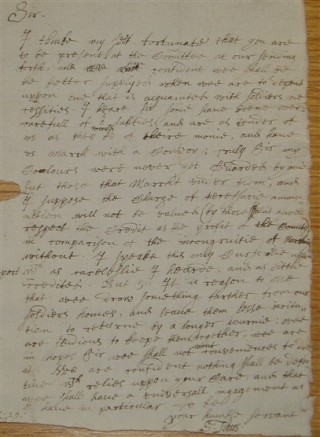 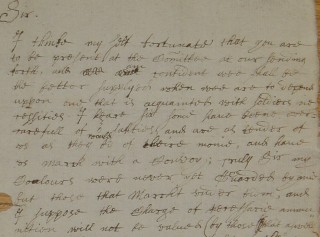 Part of Silas Titus to Cox

By 1644 the continued absence from home, particularly at harvest time, was making many of the troops restless, especially those who were serving out of the county.  Steps, including marching under escort, were being taken to prevent their easy return, as can be seen from the following letter written by Silas Titus in 1644.

To his much honoured freinde Alban Coxe Esq.

I thinke my selfe fortunate that you are to be present at the Committee at our sending forth, and am confident wee shall be the better supplied when we are to depend on one that is acquainted with soldiers necessities. I heare sir somme have beene over-carefull of our safeties and are as tender of us as they would be of theire monie, and have us march with a convoy; truly sir my colours were never yet guarded by anie but those that marcht under them, and I suppose the charge of necessarie ammunition will not be valued (by those that aswell respect the credit as the profit of the county) in comparison of the incongruitie of marching without. I speak this only cursorily upon a report, which I as careleslie hearde and as little credited. But sir, it is a reason to me that wee draw something farther from our soldiers homes, and leave them lesse incitation to return by a longer journie. Wee are studious to keepe them together, wee are in hopes sir we shall not want conveniences to do it. We are confident nothing shall be determined which relies upon your care, and that wee shall have a universall ingagement as I have in particular to be