Opposition to the Excise 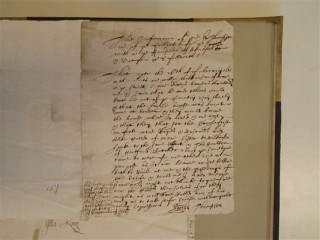 As the war went on new taxes were introduced to meet the demands of supporting troops from Hertfordshire, which were most of the time serving outside the county. The excise duties were introduced in 1643 and were the most resented, levied as they were on beer and food, and so affecting tradesmen and the poorest in society. Not surprisingly feelings ran high.

The informacon of me, George Thompson, one of the collectors for the excise within the Hundreds of Hertford and Braughin etc. as followeth: That upon the 16 February 1646 one William Wilkinson of Ware, in the street before divers hearers threatened me and said that he and others would beate me out of the country very shortly and that the excise howse was burnt down at London and they would burn the house where I lived and me also and that they that set the excise first on foote were roges and rascalles and Alice Creed of Ware, sister to Wilkinson spoke to the same effect and Thomas Houlton of Hartford, butcher, about the same time came to Ware for no other end or purpose as I can learne or doe believe but to raile at me and the proceedings of the excise and tould me I had undone him and I must not thinke to goe free nor the committee themselves for they might as well have robbed him of his money as to take it for excise with many other railing expressions.