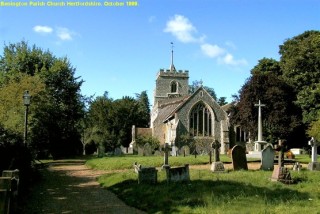 Anecdote about William Wigram of Bennington Place, impatient for his dinner as the vicar preached.

Mr William Wigram of Bennington was very fond of fox hunting, and during the season gave three or four grand dinners at his house for his field-friends. These dinners were given on Sundays, and the Reverend Frederick Pryor, the rector, being a staunch fox-hunter, always formed one of the party. The “Meet” was at the church. On one such occasion the sermon was longer than usual, and Mr Wigram showed manifest signs of impatience, especially as he could see from his seat that his groom had brought round his old pony for him. He had a curious habit of thinking aloud, himself being quite unconscious that he gave expression to his thoughts. He hauled up the from the fob of his breeches his ponderous watch, and after looking at it shut it up with a snap that awoke all the sleepers in the neighbouring pews. He then thought to himself loud enough to be heard all over the church, “Shall I invite him to dinner? No I’m damned if I do. He’s kept my pony waiting ten minutes in the cold already, and that old fool” – meaning the groom – “Hasn’t the sense to cover him up” Prior finished his sermon abruptly, but not soon enough to save his dinner.