Memories of Barley and Barkway 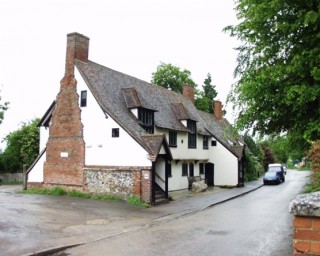 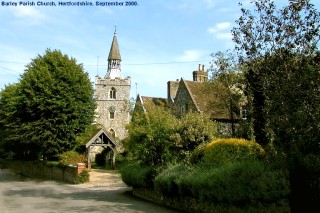 The old church was certainly in a most deplorable state. I attended service there one Sunday morning in September or October 1871, walking over from Barkway. After the service had commenced, a heavy thunder–storm came on, and very soon rain came through the roof. There was a general movement on the part of the congregation for dry seats. I shifted my quarters three or four times before I found a spot over which the roof was water–tight. Several people were obliged to put up their umbrellas.

I was staying at Barkway. My hotel bill there is worthy of record. I put up at the “Wheatsheaf”, an old fashion house, about half way up the hill on which Barkway stands, on the Cambridge Road. Formerly it was a posting house of importance, with stabling for upwards of fifty horses. The stables, for the most part roofless, and altogether in a most ruinous state, still remain or did 10 years ago. I arrived on Friday afternoon, had dinner, and spent the evening with Charley Adams, next door (in Barkway). My bed–room might almost have served for a ball–room. The mahogany bedstead – (no skimpy “tent”, or “Arabian”, or measured “tester”, but one with a solid carved top, weighing three or four hundred weight, so that if it fell it would squash a man fairly all over) – was a perfect old–world treasure. I stopped at the “Wheatsheaf” 3 days, had a private sitting–room, and every night stood unlimited grogs to the landlord, who, born in Barkway, knew all its modern, floating history, and nothing else. My horse – peace to his mane, he was 22 years old, when from no fault of his own his last journey was to the knacker’s – meanwhile revelled in oats and clean straw. What was the bill on Monday? Fourteen shillings and two pence halfpenny, which included sending a special messenger to Royston Post Office to ask for letters. On leaving, I offered the servant, who was both waitress and chamber–maid, a modest sum for her services. Never was a servant more surprised – it was a new experience. Travellers had before availed themselves of the “Wheatsheafs” shelter, but never before had they offered her half a crown. “No thank you sir, I get honest wages” – I had to finish the buckling of my portmanteau myself, while the old mahogany four–poster frowned upon me. It was not until I arrived at the “Buckland Gate”, and the turnpike–man demanded six pence, that I sufficiently recovered myself to think aloud, “Well, I’m….