The Reverend Lynch Salusbury of Offley 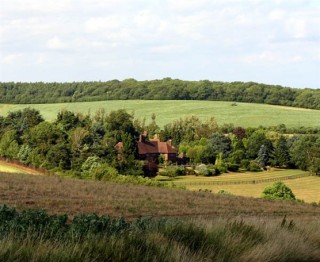 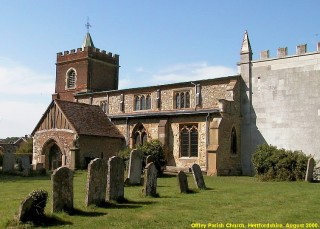 Note following an extract of the Will of Sir Thomas Salusbury, lord of the Manor, who died in 1773 bequeathing his estate to his second wife, Sarah, daughter of Thomas Burroughs and widow of Edward King of Welbury. She died in 1804 and it was under her will that the subject of this entry succeeded to her estates and assumed the name Burroughs.

Though the Revd Lynch Salusbury was heir in remainder to the estate, when he was a young man, his chance of obtaining it was very remote. He was a very poor man, and officiated as curate at Offley to the Reverend Thomas Dove, who was of course a non-resident. One night during the winter of 1874–5, a post-chaise on its way to London, broke down just opposite the curate’s house. The sole occupant of the carriage was a gentleman, who, by a singular coincidence, was named William Offley. While bemoaning his ill fortune in language common to middle-aged and irascible gentleman of the last century, the curate, attracted by the noise, came out to see what was the matter. He courteously offered the stranger the shelter of his humble lodgings until the damage done to the carriage could be repaired. Cheerful accommodation, and a homely supper by a good fire, so mollified the traveller that he yielded to the curate’s pressing invitation to remain there all night, and they parted, the next morning, the best of friends.

Mr Offley, in return for the kindness he had received, invited the poor divine to his house in Great Ormond Street, London. Young Salusbury accepted the invitation, and before long, was a constant visitor. The result was that in the early part of 1787, Mr Offley’s daughter Jane, did as her father had done on the eventful Winter’s night – she consented to share the curate’s bed. The old man gave his daughter an ample sum on her marriage, and Salusbury, now a comparatively rich man, became, in the eyes of his wealthy relations possessed of talents and virtues they had hitherto not perceived. Dame Sarah Salusbury was one of the first to recognize his good qualities, and she induced Mr Dove, the rector, to resign in favour of her relative, which he did in December 1787.

On the death of Mr Offley in 1789, Mr Salusbury came into a second fortune. As a dutiful legatee, he awaited the arrival of the funeral cortege in Hitchin churchyard, where Mr Offley desired to be buried. When they arrived there the funeral party found that no preparations had been made, as the undertaker had refused to pay what he considered to be exorbitant fees demanded by the vicar. What was to be done? The corpse was ready, but the grave was not. Words ran high. The vicar stood out for his fees, and said that as he could not be compelled to bury a non-parishioner, he would have what he asked. It was unadvisable to take the deceased another day’s journey, under a July sun, back to London, for such a proceeding would not be calculated to improve his condition.

In this dilemma Lynch Salusbury said that if the party would go to Offley, he would bury his father in law with the greatest of pleasure for nothing. The offer was accepted, and though it was very unprofessional for Salusbury to undersell his clerical brother of Hitchin, William Offley was at length comfortably laid to rest in the village where we first made his acquaintance.