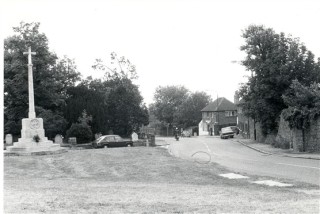 Note accompanying a letter, dated 1 May 1879 from the Revd C R Hardy, vicar of Northaw, in which he says that he has “taken no steps about 239Y. No doubt he was testing the beer for excise purposes or considered that he was acting in the execution of his duty (to himself) and for the good of the public”

This refers to a policeman (239Y) whom I (a bona-fide traveller) found in the “Sun” public house, close by the church, indulging in a pint of ale on Sunday morning, while he was supposed to be on duty. I may here remark there is a great difference between the London and the Rural police (Northaw is within the Metropolitan area…). In London a man may be as “drunk as a boiled owl”, and use the most disgusting language, but so long as he does not break a window or a head he is safe from arrest, or at least from punishment. In the County let a poor devil be in the least degree “cheerful”, his fate is doomed. The evidence before the magistrate is like this: “I found the prisoner in the road, drunk. He could not walk straight. He said nothing, and went quietly to the police station” Sentence £1 fine, and costs 12/6. Such a charge no London Inspector would take. In London if a man or woman be seen drunk, and not pugilistically inclined, the inebriate is detained at the police station for an hour or two, and liberated. Not so in the country. Now for the police. I have often seen country policemen in public houses during prohibited hours, drinking when they should be on their rounds. I have also frequently seen them drunk. Who however dare “bell the cat”? I might, but it was not my business, and I could not afford the time to go down to give evidence. No poor labourer dare do it; for in the first place his evidence would not be believed against the word of a policeman, and in the second place if he were guilty of the blasphemy of suggesting a word against a rural policeman, he would certainly suffer for it sooner or later.