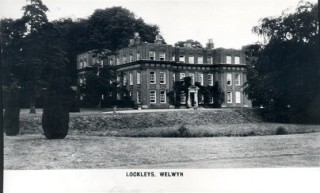 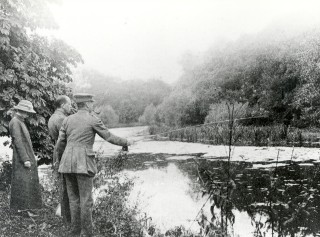 The Lake at Lockleys
Hertfordshire Archives and Local Studies

Note surrounded by letters from George Edward Dering of Lockleys, b.1831, d.1911. He and Cussans were good friends and the frontispiece to the account of Broadwater Hundred in the History is a full coloured achievement of the arms of Dering

Mr George Dering is one of the most amiable gentlemen I ever met, but by reason of the secluded life he leads, he is not appreciated at his true value. He is devoted to mechanics, and the applied arts and sciences generally, and has taken out many lucrative patents. Like many other men, myself included, he prefers to study by lamplight rather than daylight. He told me that when his father was alive, they had separate establishments at Lockleys. His father, before his right hand was shot off (which hand is still preserved in a silver casket), was an enthusiastic sportsman, and necessarily an early riser; and frequently the father’s servant would meet the son’s servant on the stairs, one taking up breakfast, the other dinner. The late Miss Blake told me that Mr Dering, when a boy, was once invited to a juvenile ball at Danesbury. During the evening his father looked in, and in answer to the question “Where’s George?”, he said “ Well he was dressed, but just before he was leaving, the carrier brought down from London a new eccentric chuck for his lathe, and I daresay he is at work at it now”. This anecdote, trivial in itself is admirably illustrative of Mr Dering, both as boy and man.

The accompanying letters, brimful of kindliness, speak for themselves, and fully indicate the writer’s disposition.