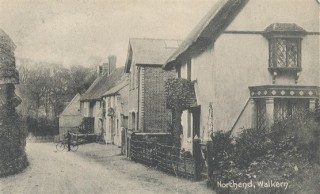 Comments alongside two press cuttings pasted in containing detailed reports to meetings of the Hertford Rural Sanitary Society, 4 September and December 1875 at each of which Dr Ogle, Medical Officer of Health for the District, presented reports highly critical of sanitary conditions in Walkern. The incidence of several cases of typhoid fever was directly attributable to the deplorable situation.

Such was the sanitary condition of Walkern in 1875; and I have reason to believe that now, in 1882, things are but little better. The great cause of this deplorable state of things is “overcrowding”. The labourers are not much to blame, for they cannot help themselves. The cottage accommodation is far short of the demand. Why not then build more? The landowner and capitalist would answer “If I build new cottages they will not pay more than five per cent on my outlay, which as a capitalist I should regard as a fair return; but as a large proportion of the tenants will inevitably fall upon the parochial rates either for subsistence during the winter months, parish doctor, funerals &c, I, as a rate-payer should be largely out of pocket by building new cottages”.

The result is, that every parish wishes its poor to live in another parish. It is true that Poor Law Unions have to some extent, obviated this, but the Unions are so comparatively small, that each Union practically forms but one large parish. Thus Walkern is in Hertford Union, while Weston and Ardeley on its northern boundary, are respectfully in the Unions of Hitchin and Buntingford. All villages are deficient in cottage accommodation. A Walkern employer of labour would say, “ I don’t mind building a dozen cottages for my own labourers, but if I were to do so, I have no guarantee that as soon as the tenants took possession of them they would not leave my service and work for a farmer in Weston or Ardeley”. Weston and Ardeley employers would argue exactly the same, and so the ball is kept rolling in a vicious circle.

It is no uncommon thing for labourers to walk five or six miles to their daily work.

I know a gentleman who lives in the large village of A., and has three farms at B., six miles off. He is rated lightly at A., but heavily at B., being owner of almost all the parish. Moreover A. and B. are in different Unions. He will not build cottages at B., but does at A. He has bought a broken down omnibus, and finds it cheaper in the long run to drive his labourers (about 20) to and from B., than to build cottages for them there.