Reverend Thomas Randolph of Much Hadham 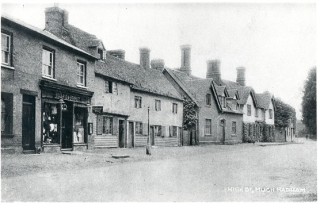 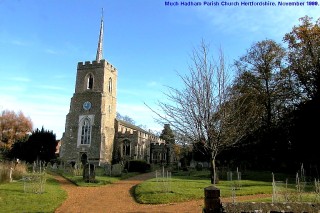 Much Hadham Church
B J Gravestock

Character Sketch of the Revd Thomas Randolph, rector of Much Hadham, 1812 – 1875 accompanying several obituary notices on his death.

Although the personality of the late Rev. Thos. Randolph was proved at under £80000, he is said to have been worth £250,000 in real property. He was excessively mean in all his transactions, and in his latter years was almost imbecile, except on one point – money-getting. He was the butt (behind his back) of every village lout. If a labourer were to say or do anything particularly foolish, he would be told he was “most as big a fool as old “Tommy”. This I know to be a fact, that in the Autumn of 73 or 74, William Tween, as farmer of Widford, apprehensive of a thunder-storm drove as hard as he could to Mr Randolph to ask him to lend him a rick-cloth to cover a stack of wheat just “housed”. “Yes I have a cloth” said Mr R., “and I am not using it, but it is of no good to you, because I bought it for hay” On being assured that the same cloth wh[ich] would keep hay dry would serve for wheat, he said “Well, you can have it till tomorrow, but if you let it get wet, you shall never have it again”

The clock on the west face of the church has only one hand. The mechanism does not provide for the minutes. One day “old Tommy” went to Tilcock, the local painter and wheelwright, and asked him if he couldn’t paint a long hand on the clock face. “I dare say I could Sir” said Tilcock, “but I ‘spose it’ll stop just where I put it.” Tilcock, you’re a fool” replied the old man, “you shan’t have the job” – ; and he did’nt; and to this day, people have to guess within a quarter of an hour or so what the time is.

Years ago, a thief stole from the Rectory garden some nectarines, just fit for plucking. The old Rector was furious. He gave his gardener sixpence to spend one Saturday night at the “Red Lion”, with instructions to keep his ears and eyes open, and to offer a reward of a guinea for the detection of the thief. A half-witted man who worked for the Wildmans, said he “knowed who had ‘em, but I aint a going to tell till I gets the guinea you promised”. Shillings and sixpences were slowly extracted, until the required amount was told, and pocketed. “Well, Muster Randolph”, said the man, “you know I am only a fool, but I looks around and takes notice. You want to know who had your plums. I’ll tell you. You had ‘em, but you could’nt keep ‘em.”

Though Mr Randolph received from Hadham £2147 per annum, besides church fees, and the rent of 291 acres of glebe, to say nothing of his private property, and £1500 a year from his stall in St Paul’s, he paid his cousin, who fulfilled all the duties of Little Hadham, the paltry sum of £100 per annum.

I had occaision to call on Mr Randolph about a dozen times, and one day, in a very weak moment, he invited me to lunch. In justice to his memory I must say, he gave me the finest glass of sherry I ever tasted. He had to go to Bishops Stortford, and left me alone with the decanter, while I was looking over some parish records. “If you want any more, have the goodness to ring the bell, and the servant will bring another bottle,” he said, in response to my encomiums of the wine. He himself was a very abstemious man, and took, I think, but one glass. I did not ring for another bottle, but the decanter was very low before I left.