How Couzins came to be in the Invasion, part 1 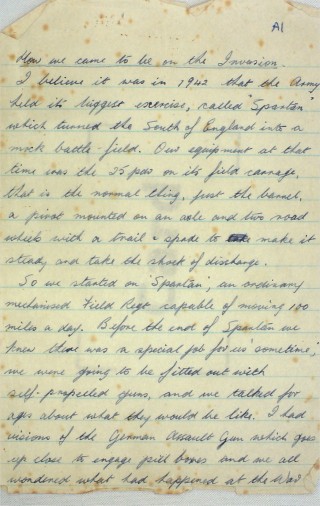 I believe it was in 1942 that the Army held its biggest exercise, called “Spartan” which turned the South of England into a mock battle-field. Our equipment at that time was the 25 pdr on its field carrage {carriage}, that is the normal thing, first the barrel, a pivot mounted on an axle and two road wheels with a trail & a spade to make it steady and take the shock of discharge.

So we started on ‘Spartan’, an ordinary mechanised Field Regt capable of moving 100 miles a day. Before the end of Spartan we knew there was a special job for us ‘sometime’, we were going to be fitted out with self-propelled guns, and we talked for ages about what they would be like. I had visions of the German Assault Gun which goes up close to engage pill boxes and we all wondered what had happened at the War Office to start giving things like this, Self –Propelled Guns, to the old and conservative Royal Regiment of Artillery.

Not long after Spartan we sent our old guns away carefully greased so that no one could say we never looked after our guns. And then somebody said “They’ve arrived at the station!”; across the fields we could see lines of railway wagons loaded with queer looking things covered with sheets. We soon passed our opinion, too big, too slow & too cramped.

It was the School of Artillery’s first effort at an S.P.1 gun, a Valentine Infantry tank Mk III chassis powered by a 300 HP 4 stroke Diesel engine, the 25 pdr had been fixed in place of the turret and a square armoured box or fighting compartment covering the lot.

We trained under R.A.C.2 instructions and got into the stage where we could handle them pretty well, and carried out dummy landings from concrete ‘landing Craft’

The idea was to actually fire the guns from the Craft as they approached the beaches, one gun to a craft. At Poole we carried out several exercises, off Bournemouth we fixed many hundreds of rounds to perfect the control of this creeping barrage, we were like a fleet of destroyers who could plaster a target from the sea and then land to become an ordinary Field Regt.

Then lost the Valentine, (we were now up in Scotland) it had failed to take the hammering we gave it, tracks broke, brakes overheated and the maintainance {maintenance} generally was hard work.

So we received the ‘Priest’ to our bosom, this was well known at the time as the American version of an S.P. gun. It was a Canadian Ram II tank chassis powered by a 380 HP, 9 cylinder Static Radial engine, a Wright whirlwind aircraft engine. The gun was the American 105 mm Howitzer. The sights were very different from ours, instead of working with Degrees & minutes (Bearing) we had to use Mills, there are 6400 mils in a circle. The shells weighed nearly 35 pounds and of course had different markings so taken all round we had a lot to learn. We learnt.

I’d forgotten the most interesting manoeuvre ever, carried out just before we lost the Valentine. It was a full dress rehearsal of the Invasion. We landed on Landing Craft at Ayr and sailed past the Isle of Arran, through the Kyles of Bute and landed at a little village with a terrible name spelt roughly TIGHNABRUICH. From there we did the exercise, the enemy held beach being Blind Man’s Banf. {A4} Aircraft laid smoke screens, we fired our barrage and in went the infantry in their little assault boats, tossing about on a bad swell. We landed and went through anti-tank obstacles and dummy minefields into action and ended by firing quite a big barrage, for practice anyway, over 200 rds. a gun. That was a God-forsaken place, one pub, miles of moors, pelting rain all day and inches of mud.

I missed the ‘aqua-bats’ with the 105 mm owing to leave and courses at Landchill School of Arty: but they were just the same.

Once again we changed our equipment, but the only different thing was the gun, we got our old 25 pdr mounted at this time.

Once more to Bournemouth & Poole, trips round the Isles of Wight in glorious weather, very enjoyable.