Cleve - the most damaged town I'd ever seen 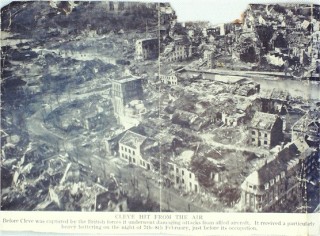 To listen to the audio clip, click play on the bar under the image on the right.

On Wednesday the 7th we moved across the field into our new positions and settled down. At 4.30 on the 8th the biggest barrage started I’ve ever heard. The number of guns used was 900 – 1100 and the noise was terrific. We fired almost 400 rds a gun, the hardest day ever. At 3.30 we stopped firing and moved forward.

Before I leave the barrage there are two unusal things about it. One was the terrific show put on by the Bofors, endless streams of tracer air-burst poured across the sky, the effect the other end you can only guess. The other was the use of ground rockets, the same things used off landing-craft in the invasion.

I remember hearing the bag-pipes as some of the Canadian-Scottish went into action about 5 am, a very stirring sound.

Our new position was only 1½ miles down the road and as we were on guard we didn’t put up the tent. It poured hard with rain all night and to make matters worse Sherman tanks were churning round all night towing our Ammo trucks and our Tannoy1 wires were out several times. A shell dropped near G.B2 and one went over & killed a Bdr. In 342, behind us.

At noon the next day we went forward again and travelled through the area which had been No-Mans-Land ever since the first push got to Nijmegen the things I saw, I wish I hadn’t, and I shall forget them. The area hit by the barrage was indescribable, complete woods were stripped like matchsticks and even the trunks were pitted every foot. Any buildings were piles of rubble. The ground itself was so well covered with shell holes that it would have been a job to pitch a tent. Further on to KRANENBURG, just past where we went into action. That town was well and truly damaged, a sight for sore eyes in England!

The next day we went into action on the edge of Reichveld3 Forest and the day after up to the outskirts of CLEVE [Kleve?]. Jerry was shelling the town as we drove up and we had an uncomfortable hour or two. We stayed two nights outside of Cleve and saw more looting than I’d seen for a long time. We changed the sub-section4 stove & aquired [acquired] a new kettle. The next morning we moved through Cleve into action the other side. I’m fed up describing damage, Cleve was really & truly the most damaged town I’d ever seen. Houses were neat piles of rubbish, water pipes stuck out of the road and I saw a mattress hanging in a tree.

When we went into action it was in a garden & the German family were still there. I directed the tank over two privet hedges, a wire fence and proceeded to drive over the trees in the orchard. We just about managed to get dug in before night only to find we had to be ready to move at 6.30 am. Two blokes went out and came in with two geese & two chickens, I have helped to eat all except the last chicken.

At 7 am the next day we moved into what was definitely a sticky position. The Command Post was in a concrete cellar of a house and the guns were 200 yards away. From here we supported an attack and fired a good few rounds. Our opening range was 1600 yds! and we had a gun with a range of nearly 14,000 yds! Jerry had us taped here and dropped lashings of shells all round. Four of us were in the tank resting after a target when we heard a Jerry gun bang three times, at the same time almost, three shells dropped round the tank, all within 10 yds. Shrapnel slit the sheet over our heads, busted our water cans, one shell dropped a foot from our kits and holed my brand new overcoat, mugs & mess tins were smothered.. Two boxes of super-charge cartridges exploded all over the place. Boy, did we pray.

For two nights we stayed there and were very glad to get away. Other shells by the way had gone over us and hit some of R.H.Q, the R.S.M had a slight injury. From there we moved over to the sector on the night [right?] where we were to support an attack on GOSCHE (our position was actually N.E of the town). The notes I’ve made only mention the nights we spent here, the first we were off duty, the second there was no firing, the next day Bdr Lissamore returned from a course & leave in England. On the third night there was a scare, less than 2,000 yds away 5 enemy tanks supported by infantry counter-attacked and we had a Stand-to from 11.30 to 1.45 in case they got to us, how we cursed the fact of being shoved up close to the line! On Tuesday the 20th we fired 120 rds, and were on guard that night.

The next day we moved SE to support another attack, this time on UDEN [Uedem?]. It was a lovely day, clear sky & warm, half-a-dozen Jerry jet planes came over but dropped no bombs. Later in the day dozens of Typhoons went rocketing all round, one of the best days since France. For a while enemy shells dropped about 400 yds away on a farm-house but they kept dropping there so we didn’t worry. At night there was a big air-raid and Jerry dropped rubbish all round. Two batches of shells came in that night 100 at 3am & 100 at 7am ready for a big fire-plan the next day (we fired 185 rds). On Thursday night each gun in the Battery fired in turn for about an hour at the rate of 40 rds an hour, my turn was 12.40 till 2 and I fired 57 rds during that time all on my own to avoid having too many men tired for the next day. On Friday there was another fire plan of 130 rounds. On this day I was told I would embark on leave on the 13th March. Lousy weather, no air support.

2 GB menas “Guns, ‘B’ Troop” and was the lorry carrying the Troop Command Post

4 a sub-section is one gun