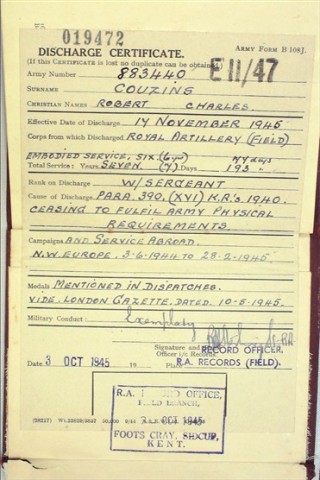 Saturday was a lovely day, the crew on duty had fired 178 rounds before 7am so I let them sleep till noon. Not much firing on Saturday but stacks of ammo came in, we were on guard again Saturday night.

The Troop Commander told us that the fighting was very heavy, we were using Divisions & Bdgs(Brigades) at a time in quite small areas.

Now to Sunday the 25th February. Once again we got ready for a big fire-plan and stacked up the ammunition. At 10.30 am the Gun-Position-Officer told me to move my platform1 as the tracks were digging in and there was a danger of being stuck, he had the director ready to pass me a new angle and was waiting. The driver was taking shells aboard and stacking them ready for loading, a thing he’d done dozen of times. I told him to start up and reverse right stick2. As the tank moved there was a loud explosion behind me and I remember thinking ‘one of those shells has fallen and exploded, the safety devices haven’t worked’ The driver got out of the tank like a flash of lightning.

I shouted ‘Get me out of here’ and Bdr. Frank Lissamore was there, a good lad old Frank.

I knew my right leg was broken and thought I’d had it, it looked as though it couldn’t be mended.

I told them to watch the right leg and never mind the left, it was OK. (I was actually surprised two days later to find it was fractured)3

Before I’d been carried 100 yds the M.O. was there asking how much morphia I’d had, I said two somebody else said one. I’d felt the prick of the little morphia tube we carry with us. I was lifted on to a jeep and driven onto the road, asking the orderly all the way how far to go, the ground was rough and I rolled a bit. After that its all mixed up, the M.O. telling someone I was going to the C.C.S, a bloke in an ambulance with his face covered in bandages giving me water, he used my nickname and I asked who he was, he was the driver and had burned his face.

In and out of ambulances and rooms, I saw the Doctor setting my leg and have a fair idea of seeing two blokes pulling hard on my foot, a Major was standing alongside as I looked up and he looked so stern I daren’t moan!

The next thing I remember is waking up in a big room, a tube was fixed to my left elbow connected to a bottle hanging above, blood transfusion. I never knew when they took it out. In the same room were three wounded Jerries and I wondered what the hell the war was over anyway.

That was in Nijmegen and I must have left there Monday, I can remember a bloke stripping things out of my clothes into a little white bag, I told him to take the guns off my sleeves. (Brass guns are hard to get)

From Nijmegen by ambulance to another C.C.S in Hertogenbosch where a Canadian nurse carried on the penicillin injection started in Nijmegen, she had 60 men to do, and gave me two or three without waking me.

Then I knew I was going back to England because of all the labels flying about and on Wednesday went by ambulance to Eindhoven. Before that journey we had a shot of Morphia and I felt lovely for the first time. The Canadians were very good the whole time and looked after us well. Sometime in the afternoon we were lifted aboard a Dakota Ambulance plane and after a very comfortable ride landed on good English soil again, the trouble was I couldn’t walk on it. In a Nissan-hut we were checked in, given tea till we nearly burst, checked out into ambulances.

The ride to the entraining station, Swindon was horrible, the little Red Cross ambulance bounced on a match-stick, and the same applied from the train to this hospital one bloke was moaning all the way. And as we arrived at Barnsley Hall Emergency Hospital, Bromsgrove, Worcs, about 5.30am. Now I found exactly what was wrong with my suspension, left leg fractured, right knee joint ‘had it’ and the crowning touch the right leg 3 inches shorter.

So now I’m in the hands of the Doctors and Nurses with nothing to do for the next few months but wait – but I can do that.

On reading through this scrappy tale, I find I have made no mention of our little friend Clara. She joined this gun crew before I did, while we were in Normandy, but she joined as an addition to the Menu Im afraid. She is a speckled brown hen, the mascot of ‘E’ Sub-section, and we carried her until LAIGLE in France, where we decided to leave her at a farm with the other hens.

In five minutes she had 5 fights so we said “Clara, you can fight, come with us.” She had a very uncomfortable time poor hen, sitting on the vily floor of the tank while we rattled along. When we settled down to a more steady life on reaching Antwerp, we made a perch in the tent and there she’d sit all night, fluffed out like a big ball. She is very tame now, taking biscuits from our fingers, letting us pick her up and stroke her. She is very well-known now the Troop Commander often asks how she is and if she is laying. When we stayed long enough in one place she would lay and we took turns to have the eggs. The day before I got hit, a piece of shrapnel went through the tent just above her head and blew her off the perch but she was O.K. May she live long, our little fat Clara.

Several of our families used to ask in their letters how the hen was getting on, Gnr. Halfacre, a Londoner, who used to look after her most was determined to take her home with him after the war. He would have done too!

1 Platform – the position of the gun

3  An alternative recording of the incident is as follows:

It happened in a small French village called ATTICHES, a few miles southeast of the large town of LILLE, on September 3rd. 1944.

341 (St. Albans) Battery R.A. of the Hertfordshire Yeomanry with their self-propelled guns were moving forward in support of the 11th. Armoured Division in their furious VERNON – ANTWERP dash.  For several hours that morning the column had been moving at a rapid pace cheered on by the excited inhabitants of the liberated villages.

Suddenly as the Gunners were gaily waving to the people of ATTICHES came the crump of falling shells and the rattle of small arms fire.  The column was ambushed!

Immediately “the air” became alive with reports and orders.  B Troop were ordered “Tank Alert” and took up defensive positions in the village against Tiger tanks reported approaching.  Sgt. Couzins the commander of E Subsection was ordered forward to cover the approaches of the village from the north.

Searching the area in front of him, Sgt. Counzins (or Smoky Joe) observed in a valley not tanks but a battery of Jerry guns, those which were causing all the trouble.

Without waiting for orders and entirely on his own initiative “Smoky Joe” engaged the Hun over open sights, picking on the right hand gun.  With his first five shots he scored three direct hits which “brewed up” the target.  The crew of the remaining guns decided that they’d had enough and started running, but E sub landed three more rounds among them before the remnants disappeared.

The advance then continued.

This is one of the many incidents which happened to the St. Albans Battery during the advance from Normandy beaches to Antwerp and Nijmegen..

Sgt. Couzins was wounded in both legs during the severe fighting round Goch.