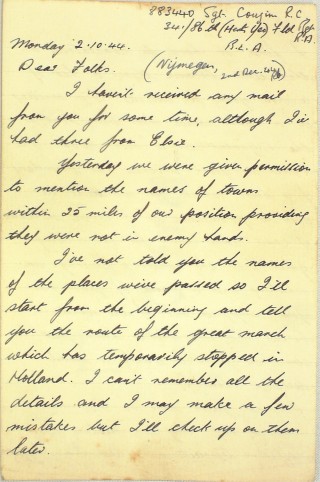 I haven’t received any mail from you for some time, although I’ve had three from Elsie.

Yesterday we were given permission to mention the names of towns within 25 miles of our position providing they were not in enemy hands.

I’ve not told you the names of places we’ve passed so I’ll start from the beginning and tell you the route of the great march which has temporarily stopped in Holland. I can’t remember all the details and I may make a few mistakes but I’ll check on them later.

I find it hard to concentrate on this letter because there’s a hell of a row going on outside. I’m writing in a room which has been lent to the Regiment as a ‘rest room’. The house is just within the boundary of a town which you wouldn’t be able to pronounce if I wrote its name. I came down here for an evening’s quiet but the walls & ceilings are shaking and a piece of glass has just slipped out of the window beside me, two blokes have just come in from a walk, a bomb decided them.

It’s all quiet now so I’ll have another try, they are dishing up coffee & biscuits now and I’m trying hard to find where its coming from.

Well, a week after we landed we were in position some three miles from Bayeux and within range of that much shelled town Tilly.

A little to the South-West of Tilly is a little village called Hottot which we pounded for days. The Allies or rather the British 50th Div were having one day in & one day out of Hottot, sharing it with the Germans.

One day we fired 200 rounds between four of us to support a patrol of 14 men who went in and out of the village to capture prisoners, they caught two. We stayed in that position for 10 days, and during that time our Troop commander was killed.

You remember in the fighting for Tilly, the BBC said that Artilary had fired red smoke shells to indicate the target to the R.A.F. That was fired by Fred Davies’ gun, the sky was full of fighters and as the smoke went over so they peeled off and fired rockets & machine guns at it. It’s lovely to watch the Typhoons, they circle round and then dive straight down with smoke streaming from their exhausts and little puffs of smoke show when they fire their rockets, the noise is unerving, I couldn’t describe it.

At the time of the big raid on Caen we were in a new position between Caen & Tilly, nearer Tilly than Caen, the name of the nearest village was Fontenay-le-Penel, which had been a job to capture. Big Jerry tanks lay on the roadside blown to pieces and on each side were graves of British & Germans.

I had been up all night, and early in the morning we saw the R.A.F. come over in streams. They flew in an almost endless line, and the A.A fire was terrible, several planes burst into flames and plunged down or else blew into pieces in the air. Later that day we fired a barrage for hours in sweltering heat & the paint burned off the barrel. Jerry was well dug in and he hardly moved. That night we had our first taste of bombing, the whole area of a mile & a half square was packed with guns, at night their flashes ripped along like those modern pin tables do when you score a thousand. He dropped flares which made us feel naked, and then bombed like the devil, we dived underground and waited while the ground shook and the AA fire streamed up in torrents. From that position we went back for a rest & overhaul, we had been in Normandy 7 weeks & had been ‘in action,’ which mjeans ready to fire, day & night. After the rest the first thing I remember was a little town or village named something like Jurques which we have always called ‘Jerks’, it was here that we had our little encounter with the Jerry S.P. gun, when Dougie Smith was wounded, his layer killed and another Sgt badly hit. We withdrew about 2 miles after that & heard that we were to give close support to an Armoured Div. which was going to drive South and then East to capture a big hill and cut off all the enemy holding on in Villiers-Bocage area.

I remember being very excited over that news & I looked at the S.P & wondered if there was anything I could have done to it so it would not break down, I got talking about shooting over open sights and made sure everyone knew what to do if it was necessary to shoot up enemy tanks. I’ve never known the blokes to listen so carefully and make sure they really do know what they’re told, we all thought we should have to shoot our way along every yard. What happened I can’t remember, except that we had our finest night drive and I tapped half a bottle of whiskey at 2 am. The whiskey has reminded me. At 3 am we were lost, I turned off the road following the rear lights of the gun in front and found myself in a field with only one vehicle in front and all the odds & ends of the Battery behind. We had a chank {talk} and the No 1 of the leading gun wanted to try to find the others, I was all for staying put, mounting guard and waiting till morning. I didn’t fancy running into a couple of anti-tank guns in the dark. We had another dose of fire-water & away we went on to the road again and as luck would have it right into the middle of R.H.Q. We followed them and at 5.30 went into action alongside the rest of the Battery.

I was dead beat but we had to rest the others first, so they laid down and slept untill mid day while I pottered about. I laid down afterwards & slept for several hours in the boiling sun & woke up feeling like a crab boiled red.

The next day our Troop went off on a special job, Jerry had dug in on the other side of a river and we were going forward to lay a smoke screen for an attack. After 3 or 4 miles a Colonel stopped us, and when our Officer told him what we were doing he said “You’re crossing the F.D.L’s now” The F.D.L is the Forward defence line, past that is no-man’s Land & Jerry. We went on for another mile and came across some of the Recce. Corps hidden in hedges, by that time it was dark & we took up our position ready for the morning. We were told there was absolutely no infantry in front and that Jerry was 1,000 yds away. The orders were rifles handy, no smoking & talking and dig in.

Three of us went on guard and three dug the trench, hour about untill the dug out was deep enough. After that the three not on guard went to sleep. At 4 am I went on guard, at 5.30 the Troop Commander told me that a patrol of 14 Jerry had been within 200 yards of us, phew! The Troop moved away from there without firing a round at about 8.30, mortar shells were landing 100 yds to our left as we went off. It was a good job we never fired during the night, he’d have seen our gun-flashes and shelled the devil out of us. At the next position we rejoined the Battery and I left to take over another gun in ‘B’ Troop, where we were I haven’t got the foggiest.

I know one thing, if I don’t finish this letter now I’ll get writers cramp, I’ll check up on our movements and write another instalment later.