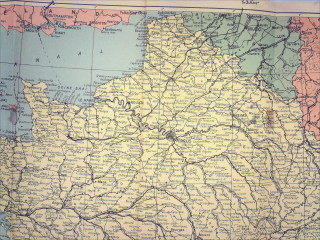 We hadn’t finished though, we went through Tournai, & Nederbrakel our first Belgium towns. It was almost impossible to drive through the crowds, they gave us ice-cream & fried chips, apples pears and everything else. Some held banners “Welcome to our Liberators” and lots more like it, one said “Reception for Tommy”. They wrote all over the tanks in chalk ( where they could find room, for they already had dozens of names of towns, girls etc:, as well as lots of dirty remarks) A favourite one was ‘Hitler Kaput’, the first Flemish word we learned. I can’t remember for sure but I think we spent that night just the other side of Nederbrakel. We made for Brussels and when about 12 Km away turned North for Antwerp. Our first position was at WILLEBROEK where we met all kinds of interesting people, a few days later we went to the outskirts of Antwerp itself where we stayed for 3 days. The docks had been captured intact but the enemy was still holding the north side of the canal it was difficult to dislodge him from the houses.

We then moved down the Escaut Canal to where a famous division had made a bridgehead, it was only very small but they had held it for 4 days. Before we crossed we were told the plan, how the Airbourne Forces were to drop and how the 2nd Army was going to drive up to meet them and be at the Zyder Zee in 5 days. On Sunday 17th at noon we fired about 50 rnds a gun (over 300 guns did the same)

Seven squadrons of Typhoons each had five mins on the enemy transport, tanks & positions and in addition another squadron circled above in the ‘cab-rank’ being called down as needed by the R.A.F contact car. The centre line of the attack (actually the width of it too) was the main road leading over the Canal through Eindhoven, Nigmegen & Arnhem and our force was due to link up with airbourne forces at these places among others. After the attack started we crossed the Escaut Canal and that night we came in for a heavy shelling, I was caught away for the slit trench but managed to squeeze down into a little gully so I was below ground level, the ground was wet and I was very glad to get into the trench during a lull in the shelling. That was Sunday night 17th. The following day we fired a few rounds at well dug in targets we were told but received no reply. We learned that the night before (Sunday) 300 S.S. had attacked a factory 600 yards to our rear, but had been repulsed by our favourite Infantry Div:, the ones we had landed with.

On Monday night we were treated to an air raid worse that the one at Fontaney LE Penel (and we were scared stiff there). The bombs dropped so fast it sounded like a big gun firing like a machine gun. We crouched in the bottom of our trench while the shrapnel whistled overhead. Some ammo dumps or trucks were hit by the canal, they burned & exploded all night giving off the queer smell that cordite does give when set on fire. The mist & smoke drifted around and as I smelt the cordite it seemed to me like D.M. a nose gas and I got the wind up. I dashed into the S.P and grabbed my respirator & then laid on the floor of the tank amongst the dirt & oil as more bombs whistled & crumped. I finally decided it was only cordite, mainly because I couldn’t feel any effects from gas. Anyhow I was on the right side, had it been nose gas probably followed by phosgene I would have been the only man alive out of hundreds. Two men went what we call ‘Bomb Happy’ and had to be sent away, the Army is humane in that respect for although they would have been alright later a few more bombings would have ruined them for life.

That area, the small bridgehead over the Escaut Canal, was packed with guns, tanks & supply vehicles and in spite of the two nights every vehicle moved next day. The only casualties as far as we knew being two men bomb-happy, one stone-deaf from a nearby burst and most of the Battery Headquarters cooking pots turned into sieves (or should I say colanders)?

Early the next morning after a bad night’s sleep in our damp clothes we followed in the wake of the armour which had broken through the crust of the enemy’s lines. Not far out was a sight I had not seen before, even in Normandy, in a square 50 yards were 9 Sherman tanks, all with direct hits from a small calibre gun and all burned out, we found out later that the men (or some of them) were in them when we passed by …..

A few miles up the road, not far enough away from some tank driver to have forgotten the nine Sherman’s lay the body of a German on the dint between the edge of the tarmac and the ditch. We could see the tracks made by a Sherman as it curved from the road, over the body and on to the road again. I remember thinking that the driver must really hate to do a thin like that.

After a few halts during which we never knew what would come out of the mist on each side of us we ran into Eindhoven and received a terrific welcome from the people. I remember the sensation a sausage sandwich of white bread caused there. A girl fetched all her relations to see it and made me very embarrassed (but I carried on eating). As we moved through the town we met some of the U.S.A 101st Airbourne who had dropped at ZON and I spoke to a glider pilot, when we said we were glad to see them as it was touch & go whether we got to them or not , he said “Boy , we’re sure glad to see you!” The pilots’ first job is always to get back to a place from which they can be shipped home, they never join the fighting as they are highly trained men.

A few miles past Zon we turned off the road and went into action alongside the L.Z or landing Zone of the 101st. A huge field was covered with WACO (pronounced WHACKO) gliders and jeeps were going round them taking off supplies. Our guns pointed West at 90° left from the main road and our job was to support the 101 Airbourne and a squadron of British tanks as they went into attack a force of the enemy threatening the road.

We stayed about three days and there was never a dull moment. We saw the strings of Dakoter transport planes slowly drone over on their way to another area, perhaps to the lads at Arnham whow ere already fighting for their very lives.

We saw an enemy fighter whistle along one column and send five planes crashing to earth like huge flaming comets that hit the ground with a loud explosion, from which rolls of black smoke bellied upward. I heard a glider pilot say ‘Jump you God-damned fools’ and ‘That’s five good boys gone west’ (the crew of one Dakota) as no little white blobs left the plane. Another strated on its lst dive and you can only imagine how we felt as we watched the crew jump one at a time, 5 blobs of white coming down slowly in the black trail of the burning plane. The Spitfires came too late.

We watched other planes drop supplies not on us as they should have done but over Jerry lines, and the faces of the Yanks as they cursed the men who had presented Jerry with tons & tons of the best rations any Army had. I saw a Staff Sergeant from our tanks brought in to our Command Post, his face a dull dark red that looked like suntan but was really dried blood from his head wound. Out in front the Yanks were fighting like madmen, a chap from our O.P. tank who watched said they were the best infantry he’d seen since the boys of the 50th Div: in Normandy and that was saying a lot. We saw a big column of Jerry prisoners brought in by the Yanks, once again I said to myself “Are they the men we’re fighting?” They didn’t compare with the Yanks or ourselves and I couldn’t say what they thought. Some thought they’d be shot but others grinned.