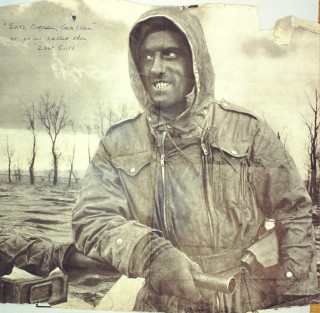 The next day we felled several trees which would have blocked our line of fire in certain directions, and later we fired the first rounds since Jabeek in Holland.

The name of the village was RESTAIGNE, roughly between ROCHEFORT and ST. HUBERT on the southern tip of the German salient into South Eastern Belgium. We were nearly the first British troops into the village, and a farmer brought us 10 eggs and a jug of hot milk. As usual they didn’t think much of the Yanks and the British soldier could do no wrong. We got on well with the people and they offered a room to the off duty crew which we accepted. That night the whole family crowded into the room and we sat round the fire untill 10.30 pm struggling with the language which was not proper French, but a dialect (or PATOIS) called WALLOON. A young chap told us several smutty jokes after a lot of explaining, and two stories of the Germans during the occupation. The two stories were these:-

A German officer went to a house and said “Bon Jour, Madame”, she replied “Bon Jour, Gross Biest” which means in their language., ‘great beast’. The German suspected something and called a villager to interpret what she said. The villager saw what had happened and explained to the German that she meant “Gross Chef” or big man (important man), whereupon the German said “Me Petite Chef, Hitler Gross Biest!” That tickled them to death and the whole village called Hitler a great beast from then on. The second story was:-

A little boy in the village had a little toy which made the same noise as the Germans used to jam the B.B.C., a kind of musical ripple. He asked a German if he would like to hear the B.B.C. for 5 francs and the German thought the boy would show him either a wireless set or some people listening to one. He gave the boy 5 francs and the boy fished out the toy and wound it up, and ran off with 5 francs.

The next morning, the 4th, we suddenly had the order ‘Move in ten minutes” Phew! The biggest scramble I’ve ever seen, the tent was up and bedding was all over the place. When we moved off the fire was still burning in the stove, smoking like the devil and the S.P. looked more like a gypsy wagon than ever. We made most of the journey cross-country so there were no thrilling moments and we arrived in our present location in a snowstorm. We are too far from the village to use any houses and all live in the tent which is quite comfortable. We are within range of BURE which both armies evacuated two days ago, we have helped to smash a German attack, and since then have had two days very quiet.

The situation is somewhat dicky here all the same, we have a look-out on the hill in front in case of Jerry breaking through to us, and two minutes ago I had orders as to what to do in case of a sudden attack. The main part of them is that we jump on the tank and leave everything behind. Very dicky indeed.

We are sitting right on the tip of the salient and in the way of his general line of advance, who knows? maybe they’ll {there’ll} be no more chapters in this story. (Somewhat in trouble 7.1.45)

The last page of pessimison was not necessary as the only tanks we saw were our own, however we were ready and that was the main thing.

We moved the day after I wrote that, and went roughly round the tip of the bulge to the underneath (southern) side.

My position* was awkward, I had to cut down a double telegraph pole and three trees in order to make sure any rounds we fired cleared all obstacles.

It so happened we never fired a round from that position, but again we had to be sure. We never had much snow while we were there but the frosts were terrific, one night we had 27° frost.

We knew the Americans we{re} attacking from the south (at Bastoigne) and that the British were attacking from the north. We didn’t expect what happened. The enemy with-drew and left us sitting miles out of range like fools and we were like that for several days and finally were given ‘Cease Fire’ and we covered up and packed away the ammo.

Rumour said we were going back but that the roads were too bad. After a couple of days the roads had not improved but we set off nevertheless. The day before I packed up the tent etc and moved into a house so that we needn’t rush about in the morning. Two interesting things about the house were that it had been between tanks firing at each other, and the people had a donkey that ate cigarettes.

On the way back we passed through Rochefort, and saw dozens of destroyed enemy vehicles and quite a bit of bomb damage.

Once again we slipped and skidded but came to no harm partly because we were pretty used to it by now. Two things I remember most. A mile long hill up which I ran & walked (as everyone did) while we threw iron stakes under the tracks, the road was scattered with rubbish thrown under tracks and in addition a Yank truck drove in front of me while several Yanks and some of our blokes shovelled ashes under the tracks. I was wearing khaki, overalls and the zoat-suit (which consists of three thicknesses, khaki, oilskin and gabardine, I was glad to get to the top of that hill. Part of the way we went over the fields which was easier but sometimes slower. We rejoined the road at one point half-way a hill and were stopped by the Troop-Commander. His tank went within a yard of sliding off the road into a field 15 feet below. When he had got clear we went down and it was the trickiest time I’d had. There were big trees every 15 yards along the edge of the road and as we came opposite each tree the driver pulled a little towards the centre of the road as it didn’t matter if we did skid while there was a tree to save us. It was between the trees that we worried.

My story is now 3 stops behind, it’s a big jump from the Ardenne to Nijmegen.

To continue with the journey, after a very full day we pulled into MARCHIN, a small town south of HUY. When we came to fill up with petrol we found that the petrol wagon had been blown up by a mine, over which all the S.P’s and tanks had already passed. However the petrol did not catch fire, the rear nearside wheel had been blown off and all the oil destroyed and there were no casualties. Just the job. We slept in nearby houses that night and moved at 8.30 in the morning, passing through HUY. At about 4 pm we rolled into our destination SCHOONDERBUKEN near the town of MONTAGUE (which revels in the Flemish name of SCHEREPENHUEVEL)