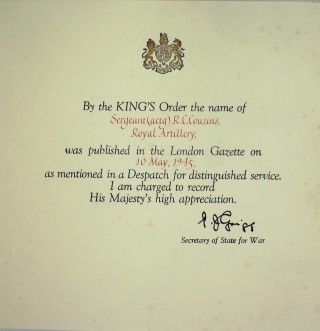 Civvy billets again for a fortnight, maintainance, classes and blanco as per usual, all very enjoyable. There are several things worth noting about this little village. One is the Black Market, our predecessors had sold stacks of stuff and there was a price for everything. My people were poor and I wouldn’t take any money for the soap and cigarettes which I gave them. I bar of soap would fetch a good 100 frcs, & ten cigs 10 francs.

The people would do more work at night than in the day, there was a lot of queer things went on at night (12 boxes of compo pack rations went off one night!)

One night I got zig-zag on English Gin (Naffi issue) beer & cognac. The cognac was 10 frcs the most horrible concoction ever made, the people made it locally and it is no exaggeration to say that petrol formed part of the ingredients (just before this time some troops had been made seriously ill in Brussels by drinking some ‘hooch’ made from petrol & anti-freeze mixture)

Two of us went into a Cafè and ordered two beers & two cognacs, we tasted the beer and pushed it aside, tasted the cognac & threw it on the floor & walked out. We swore a solemn oath we’d never drink another cognac.

One evening after tea, it was round about 6 pm, the Troop Commander walked into the Mess and said “We move at first light in the morning”. To me he said “Get your batteries in to-night if you have to work till two-o’clock.” That was a hectic evening (we finished at 9 pm, the Tp Cmdrs tank still wouldn’t start at 1 pm) and at 7.30 am we moved off. Only a few of us knew where we were going but everyone had a good guess.

For two days a steady thaw had been cleaning the roads so there was no slipping about, it was a real pleasure.

Our journey was uneventful except for stripping a bogie (losing the thick rubber tyre from a bogie wheel) and towing another S.P with its engine seized, for 20 miles. About 4.30 we rolled into Eindhoven after passing along the same roads we travelled during our push from the Escaut northwards, we remembered every place we had stopped, and the crowds, and the weather, vastly different from this last time.

We knew there was a big scheme afoot (it hasn’t happened yet) but we hardly expected the precautions we had to take. Every sign indicating 2nd Army had to be covered up, we were shut in a school and not allowed to speak to civilians.

The next morning we repaired a broken link and at 5 pm we moved north again.

While we waited to move I saw an amusing thing but which indicated the fuel shortage here. Across the road was a weigh-bridge which handled coal trucks (lorries). On our side of the road was a crowd of men women & children with buckets and as a coal lorry drew in they rushed across and started grabbing lumps off the back. The driver got out & knocked them away but they didn’t go, and as he drove away after being weighed so they started again.

We drove along near enough the same road we had taken before but this time there were little rows of graves where there had been smashed lorries.

In order that German recce planes should not see any extra movement of troops we moved by night past a certain place, no English vehicles were allowed over Grave Bridge in daylight.

And so at 12.30 am on Feb. 3rd we drove into the edge of a wood and hid ourselves, that night was the worst I’d spent for many a long day and I knew the others were the same. As it got light we all thought ‘Thank God’. Billets had been found but they were too far away so we decided to bivvy down.

The weather is very misty so our fire smoke doesn’t show much, otherwise we should have to put the fires out. This afternoon we started digging in our ammo which lies alongside our prospective gun-platforms. We have over 500 rds a gun, & there will be hundreds of guns, so when it does start it will be some do.

Incidently I’m only 2 miles from where I started writing this story.

I said the weather was ‘misty’, to be truthful its rained hard for days and its b—-y miserable, also I’ve got a wicked cold. In a few minutes I’ll write to the folks & say I’m well & comfortable, such is soldiering.

Now I start to write the last of this little story. To go on from where I left off. We stayed under cover of the wood only going out to get our new position ready.