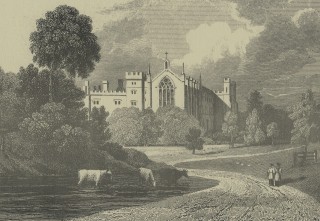 Rose at 7. After Breakfast first I went to see Fairy. I did not take her out because I took her out a great deal Yesterday and I thought I should tire her, so I let Fire Fly about and let him graze. In the afternoon we all went to see the harvest labourers have their dinner which they appeared to enjoy very much.

Rose at 5 and 20 minutes past 6. After Breakfast I took Fairy on the lawn and Randolph, Regi and I played at hunting. They hunted me and Fairy. In the afternoon Miss Smart and [I] walked in the Upper Park. We saw a great many of the deer there. I imitated their cry and some of them answered me.

Rose at 7. After Breakfast we hunted like we did Yesterday, but I left off rather sooner. In the afternoon Miss Smart went out with Mama. I went to see my Rabbits and let most of them out for a run, which they enjoyed very much. When I came home I saw Flora and I gave her some bread.

Rose at 8. Sunday morning after Breakfast went to Church. In the afternoon at ½ past 4 walked with Papa to King’s land. It was a nice walk but Papa went like a steam engine. I had some difficulty to keep up with him.