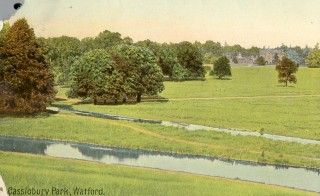 Rose at ½ past 8. Went to Church, coming out shook hands with Georgie Colville. Took a short walk in the afternoon with Miss Smart, then went into the garden, tried to make some natural wreaths. In the evening wrote a letter to grandmama and told her all the news of Cassiobury.

Rose at ½ past 7. After Breakfast went on Fire-Fly to the farm and to Balie’s. In the afternoon took a walk. Miss Smart came in about ½ past 5. I then took some pieces of bread to the Chickens. Let my dove out and put him on the Polly’s Perch, he did not attempt to fly.

Rose at ½ past 7. After Breakfast first cut a turf for Lark and then took some bits of bread to the little Chickens. My dove’s eggs will very likely be hatched by to-morroe, they are already chipped. Took a walk with Miss Smart to the farm and to Balie’s, saw the Rabbits, and picked them some grass took a turn in the Park.