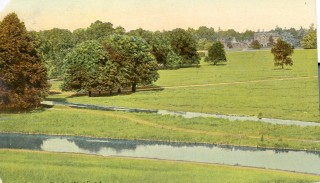 Rose at 10 minutes past 6. Fed Fairy when I was dressed. She is always very ready for her breakfast. In the afternoon took a walk in the Upper Park and home by Barker’s. Mrs Barker gave us some cake and wine which was very nice.*

* The early Victorians did not drink tea in the afternoon but had wine and cake.

Rose at ½ past 6. After Breakfast took my darling Fairy out to graze. In the afternoon first I picked some turnips out my garden and then Miss Smart and I took a ride. We went to Abbots Langley and home by King’s Langley and altogether a very nice ride.

Rose at 8. After Breakfast went to Church. In the afternoon walked with Papa. Mama has got a little dog named Fido. I forgot to say that yesterday when I was going to feed Fairy I saw two of the men frightening the Bucks, at which I was very grieved because Deer are my favourite animals…