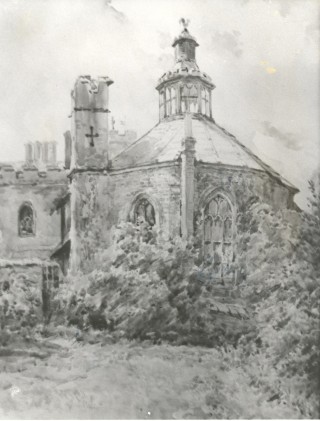 Rose at ½ past 7. After Breakfast went to shew Miss Dundasse My Rabbits. I went there on my pony without a saddle and had some difficulty to keep on and once I did slipp off when he was trotting: brought my favourite Tidly home and let him run about the passages. In the afternoon I stayed in most of the time because it was so rainy.

Rose at 7. Found my poor little Goldfinches all dead. Some maggots had sucked their blood. They came from some egg that had been dropped while feeding them. I was almost ready to cry. Afterwards went to see my rabbits, and in the afternoon I walked about. In the evening there was a servants ball, at which we all danced very merrily and the company drank Malden’s health.

Rose at 8. I did not go out in the morning because I was busy about my Birds. In the early part of the afternoon I rode. I then went to my garden and worked in it until ½ past 7. It employed me a long time hoeing and rakeing it. I then came home to my Birds.

Rose near 8. After Breakfast went to my Rabbits and let the 4 old ones have a run out of doors to stretch their legs. Came home and studied a little. In the afternoon rode my pony. Heard from Baley that some fawns had been born and went to see if I could see one of them, but it was not in its place. I shall perhaps take one tomorrow if it is strong enough.

Rose near 8. After Breakfast went in the garden, hoed my kitchen garden a little. In the afternoon went with Balie to see if there were any fawns. Found a little black one, but it was not the colour I wanted. Afterwards I took some of my rabbits in the hay field. I lost 2 of them – perhaps they will return.