Audio footage of Ann reading extracts of her diaries 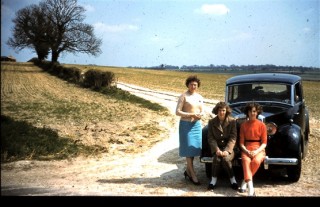 Mrs Mead came round.  Nana and Grandad came.  Grandad took Jane and I to Auntie Jo’s.  Daddy got beer from Grandad.  Mummy got bulbs in pot and I got cartridges for my pen as Christmas presents in advance.

Opened some Xmas present.  Jane and I played ‘career’.  Could not eat out pudding.  Found my tennis racket and Jane her camera and Dad his electric blanket after a treasure hunt.  We all played ‘careers’ till 7.30.  Watched the TV the rest of the evening.

Woke up at 10 am.  Jane and I helped in the canteen at Clare Hall (as Red Crossers).  Elsie came and gave Jane and I a brooch each, toffees and 2/6.  Mr Herbert came round.  Very windy and rainy weather with gales at times.

Opened a few presents in the morning and the rest in the afternoon.  I had lots of lovely presents.  Had a bath in one of Jane’s bath pearls and Auntie Sheila’s bubble bath.  Powdered myself with Jane’s Boudoir powder and wore Dad’s nightie.

Took my satchel in to be repaired and my green skirt to be cleaned.  After dinner, Mum, Dad and I went to Enfield to the School Travel Service to enquire about Hilary’s and my travel to France. Mum and Dad then went to Auntie Jo’s and Uncle Wally’s.

Did lots of experiments by ourselves in Chemistry.  Had an awful fog with a visibility of about one yard.  After school we bought Mr Hallam a present of a fountain pen. Went to The Young Liberals AGM.  It was very good.  Jane is Secretary and I’m on the committee.

I dreamt of a white Christmas and my dream has come true.  It snowed on and off all day and it’s still snowing.  Dad and I had a walk to the sweet shop.  Jane went out and from 5 pm to 11 pm Mum, Dad and I watched TV, eating nuts, fruit, nice pies and drinking ginger beer, bitter lemon and coffee.