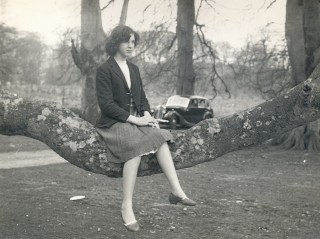 Did shopping and got a couple of bargains. Dad could not go out cycling ‘cos it was raining. Wrote down a whole list of birds and animals. Mummy was asleep all afternoon. We danced after tea.

Cleaned out all the animals. Started to make playground for Dumpy. Mummy fumed about Jane’s homework so wrote a letter. Miss Pankhurst came round so could not watch ‘I Love Lucy’. Daddy went out cycling.

Mum had a valentine card from Dad. Mum & Dad went to Arnos Grove so Dad could see the Doctor. Went to pictures to see ‘I only Asked’. Dad went to some kind of meeting at the Potters Bar Hotel.

Got up a little bit earlier than the others to clean out my animal. Washed some of my things for tomorrow’s school. Went for a cycle ride with Jane, nearly to Hatfield. Took picture of a goat looking away from me, in close up.

Made the breakfast I am making in domestic science exam. Cleaned out animals. Did some ironing. Dad went for cycle ride. After dinner, they went to see Aunty Jo and Uncle Wally. Washed my hair and had a bath.

Quite a nice day. Cleaned out Omo. Mum and Dad went for a car ride. Jane set my hair. I went to the square dance with Hilary, Carol K and her friend Lyn. Frances and Celia were also there. I danced with John, Guy and Alan and many others. Dad took my photo.

Did my homework. Did some more of my holiday folder. Dad went for a bike ride. Mum did a few school reports. Stayed in the lounge all day. Watched a play on television. Mum did some ironing.

As Mummy felt poorly this morning, Jane and I did the shopping. As neither of us would wheel the trolly basket, we lugged carrier bags around with us. When I got home I told Mummy about some black flatties in Rainbow’s reduced from 65 shillings to 25 shillings. Mummy gave me the money and I got them. We all went shopping in the afternoon. Jane bought a pattern and wool to start knitting. In the evening we watched the television.

After I had washed all my things, I baked a tart called a John Peel tart, made with golden syrup. It was rather nice. When dinner was finished, Daddy went out on his bicycle to have tea with his club. All afternoon I did my homework. After tea I said doing my chemistry homework drinking Martini. I had a bath and washed my hair then we all watched a farce on television.