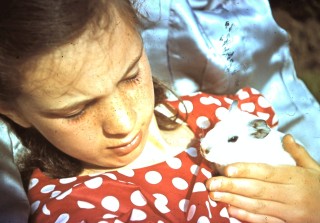 Did English and got low mark. Ordered new comic called Bunty. Rosalind did not come to school. I made toy wireless with matchbox, cotton reel, cotton and match.

Got eleven and a half out of 12 for arithmetic. Started to write out ten questions. Had PE for first time this term. Came home early because of bad weather. Had Writing Lesson in pencil which I liked.

Cleaned out Omo. Went for a ride in the car. Snowed and snowed after a morning of sunshine. Had a bath and had hair washed.

Walked to school ‘cos of snow. Stayed in at playtime. Dad collected Mum. Dad went to photographic meeting. I got a House Point.

Walked to school. Had netball with new teacher. Went to dentist with Celia. Daddy picked us all up at 4 o’clock. Jane went to pictures with her friend to see “Me and the Colonel”.

Jane went to Mount Grace for cycle test but no-one was there. Mummy bought me a pair of pants. Mum and Dad went round to Mr & Mrs Kennedy. Did a jigsaw puzzle.

Jane washed and shampood Snowy. I cleaned out Omo. I mended 3 of Mum’s earrings. Made a brooch for mummy with the back of an old brooch and glass stones I have collected. Dad went for a cycle ride in the morning and took Mum for a ride in the car in the afternoon. Jane and I bought ice creams each while they were out.

Had my room changed round then tidied and cleaned everything up. Found my cookery apron with all my dolls clothes. Went to Woolworths to see if they had found my brooch. They hadn’t. Mum had hair appointment. Cleaned my plimpsoles. Dad brought home a record on the ‘Planets’. Had Red Cross meeting about the panto tomorrow.

I did not do anything during the morning as it was such a lovely day. Dad went on a cycle ride. At 5.30, Mr & Mrs and Hilary Lockwood came round to talk about our journey to France. Watched a lovely play called “Venus Brown”

Mum went back to school. Jane and I went to London. In Regent Street, Jane got herself a pair of white pearly winkle pickers for 35 shillings and Mum treated me to a pair of cream ‘T’ barred chisel toes (new fashion) shoes for 25 shillings. Both sale price. Dad and Mum went to judge a photo competition.

I woke up this morning feeling pretty lousy. It resulted in me sneezing all day and ending up in going to bed early. The fifth year people start their mock GCE today. Only a year more for me! As I am becoming interested in the WRAF, I sent up for a book about it. After tea I had to go straight off to bed while Daddy went to the Photo club and Mum and Jane watched TV.

As I felt so awful this morning, I stayed at home. At about 8.45 am, Mummy came racing back, after leaving for school, bringing a pair of shoes and slippers for me, bought at the first day of Rainbow’s sale. At midday, I went out and got myself some white high heels. Total cost (3 pairs) 35 shillings. Dad came home late and Jane went to shorthand class. At work, the boys chose her as best beauty from 5 girls!