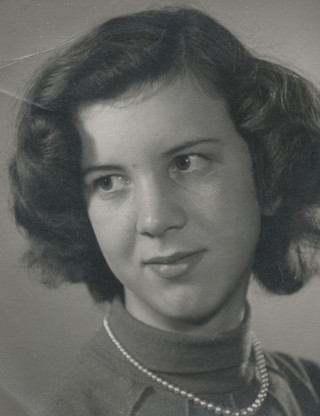 Rabbit escaped but Jane called it back. Stayed to rounders practice. Mummy bought me another darker edged blouse, Jane another blouse the same as she had last Wednesday, and a pair of blue pyjamas, and herself a blue nighty. Took guinea pig and rabbit into 6 The Byway garden ‘cos she likes animals.

Wore new blouse. Mr Beazley told me that I was to be Princess Elizabeth in our play. Daddy went to the Cotswold hills with Mr & Mrs Sims and Mr Thompson to organise our outing on 15th of June. Mr Lunnon came round. Jane lost two tennis balls.

A little boy was run over outside school gates. Lots of people felt sick and had to be walked round the field. Went to Woolworths in dinner hour to get some curlers with Hilary. Had a medical inspection. Packed and weighed case for tomorrow.

Today I went to Guernsey. We went by coach and plane. Took some photos. Smashing hotel. After tea, Carole, Susan, Gillian, David, Brian and I went for a walk over rocks on beach. Bought a souvenir spoon. Cocoa the guinea pighad her third lot of babies.

Went to Drama Club in school. Made a skirt. Jane got a new blazer. Dad bought some paint to paint the bathroom. Helped Dad to do gardening in front garden. Dad got a sore eye. Mum and Dad went to polling station to vote then had a drink.

I got up late. Did my homework. Had a bath and washed my hair. Dad mounted some colour slides. Mr Herbert came round for the evening. Jane and I stayed in the front room.

Rather cold today. Had small biology test. Spoke to Keith at bus stop. Jane went to evening classes. Dad got promotion at office. Got us all little presents. He and Mum went to Photographic Club.

Hilary went to an interview at Trinity College for her clarinet. She brought her budgie Charlie round for me to look after. Mr & Mrs Kennedy and Sally called. Got terrible cold.

For the whole day, non-stop, I did my history homework. In the end I had written 12 pages. Daddy spent all his day putting on the undercoat in my room. After tea he went out on his bike while Jane went out with Ricky. I read my new book. It is terribly good. I’m glad I got it. I washed my hair and got to bed at 11pm.

I must write smaller, it’s getting far too large. I was hoping it would be a sunny day so that Hilary and I could have our sandwiches outside. It turned out to be a very cold day. The coffee in my Thermos warmed me up. On the way home, I bought the record ‘Love Letters’. Daddy did overtime. Jane went out with Ricky. Mum sewed. I worked.