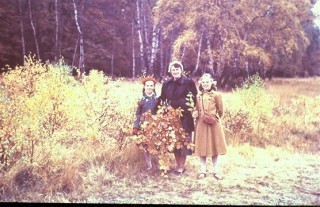 Cleaned out Omo.  Embroidered ANN on my PE blouse.  Went for a ride to Northaw Great Wood.  Walked through the forest and picked lots of fungi.  Jane stayed at home.  Wrote out a crossword again.

Took washing up to Bendix.  Went to Epping Forest.  Jane did not want to come.  Went to see Carol and she could not come swimming.  Nana and Grandad went to the Ealing dinner.  Dad and I developed a few of my negatives.  Dad said they were all soot and whitewash.

Dad bought me a reflector and battery for my bike and Jane a front lamp.  Dad went for a bike race and Mum went with him.  Joan and I went to Finchley Baths, found it was closed so went to Wood Green instead.  Jane went to a square dance.

Found the strong gale last night had blown the roof off Omo’s hutch.  She was soaked so I brought her in and she soon got better.  Went to London.  Mum got a coat, a hat and two dresses.  Jane got some slacks.  I got a petticoat.  Mrs Kennedy sold us her kitchen cabinet, and Barkers van brought it round.

Did a little German play in class.  John B talked to Hilary and I after school and gave us a jelly baby.  Jane and I went to the first Young Liberals club.  Five went and we are both on the committee.  Jane got a pair of pearly stiletto pointed schoes.

Cleaned out Omo.  Did some homework.  Hilary and I went up to Clare Hall Hospital for the Red Cross canteen work.  Washed my hair.  Stuck some stamps in my album.

Got a letter to say that I had come second in the Daily Telegraph holiday diary competition.  Mum and Dad and Mr Herbert went to London to see a photo exhibition.

Got a new pair of shoes.  They have 3 inch heels.  Mum and Dad did some gardening.  Watched Sir Laurence Olivier in Shakespeare’s Richard III on television – it finished at midnight.

Still foggy.  I can’t write anything important as nothing worth noting happened.  English and History were ordinary. Biology and Chemistry were the same as usual. Jane went out, Dad came home late, Mum read and watched TV, I did my homework.  In fact it was a very ordinary day – goodnight!