The Diaries of Arthur Peck, April 1860 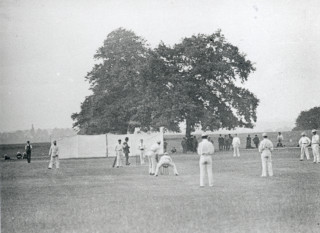 Fine and mild. We was at work at home. A boy drowned named Grey, Dye the sweep his Grandfather. DB at Mrs A. Munnings’s. I went for a walk with her. We had a letter home from Aunt Sarah at Birmingham.

Very fine and mild. Good Friday. I went cricketing all day. Charles Whittaker came here to dinner. Father, Mother, Ann and C. Whittaker went to Watton in a four wheel chaise, left Ann there. DB came here to tea and supper, I went for a walk with her. Jim at work. Miss Whitley came here. Joe went to Rye House in afternoon with some more.

Showery and very cold. I was blacking letters. I and Father went rabbit shooting at Howe Green, killed 15. DB went to Mr Lingholm’s at Cole Green. I went for her at night. I was very tired. Joe went to Popular Entertainment at Corn Exchange, Mr Lerigham read.

Very fine and cool. I and Jim went to Thundridge Church Yard with Mason’s head and feet stone. Old Woodwards the parson would not let us fix it, had to bring it home, because it had on it May he rest in peace. Father wrote to Mr. Hanbury about it. DB came up here. I and Joe went cricketing at night. I went home with DB. Very tired.

Very fine and cold. I was making a slate cistern. Father was blacking letters. Pris went to Hertingfordbury with DB and went to tea with her. We had a hen come off with 4 chicks. I went cricketing at night.

Showery and mild. Father went to London. An accident on the Great N(orth) Railway, 2 killed, several injured. I went to Ware for some slate. I and DB went to Popular Entertainment at Corn Exchange, the last this season. Lord Cowper in the chair. Mr. Armstrong read Pickwick Papers. Emma very sadly.