The Diary of John Carrington - April 1805 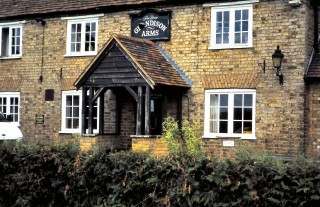 Easter Sunday To Tewin Church, the Reverend Mr Mayes of Digswell, preached a long sermon: 40 minutes.  After, dined at Son Johns and Spent after with the painters and paper hanger, Mr Silk, which are at work at Bramfield….1s 3d

Easter Monday Afternoon to the Earl Cowpers Arms, Birch Green, the widow Janeses, as the Hertingfordbury Vestry held there.  (I was) after the widow Kettles money paid by me. Spent there with Davis, Lord Cowper’s Valet and etc being there a fair.  Boys running in sacks, ass running, young girls for a shift decorated with ribbons: 2s 3d

To Bramfield Vestry as Overseer.  Dinner at the Grandison Arms the widow Deards.  Buttock Beef, Roast Shoulder of Mutton, puddings etc. Mr Preston, Joseph Deards, Richard Burgess, James Allen, Wing (Vaux’s Bailliff), William Smith (Mrs Hudson’s Bailliff), George Richardson, (the) Church Clerk, and myself and Austin the Vestry Clerk.  Gave all the poor a Dinner at home and they that came for afar…..

[During that summer, the whole country was on alert.  People knew that a huge French army was at Boulogne, on standby to cross the English channel. All over England, patriotic Volunteer armies had been formed in order to defend their homeland against the French  invaders.]