The Diary of John Carrington - June 1805 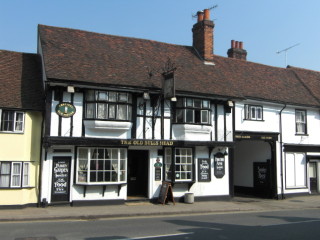 Was this the Bull that Carrington mentions?

To Ware on Pony went from Hertford with Mr Allington (gentleman) and his band of Music, being chosen Captain of the Ware volunteers: they met him about half a mile on the road with their colours. Then entered the town and they marched through the principal streets of the same with his band playing; and bells ringing and drew them(selves) up against the Market House; and the Band playing God Save the King and fired 3 volleys. As being the King’s birthday and then dismissed and to repair to the Bull one Browns, to dine at 3 o’clock to a good dinner:….. with plenty of good wine and punch. And at 7 o’clock they drew up and marched him out of town…. They met him in the morning and then his band took him to Hertford and played him home.