The Diary of John Carrington - March 1805 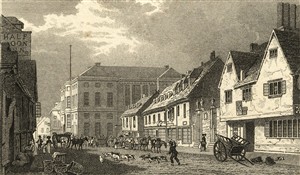 To Market on pony put up at Dragon Websters dined there Dinner 2s. Spent after 6d ,at Bulls Head, when treated Pallet of Eason Green. Spent after at Cold Bath with Winn and gave away…..altogether 5s. Sold black oats today, 3 quarters at 34s

To Market on pony, dined with Mr Archer of Priory Farm, paid his bill £18. Spent after at the Bull, after, took off Mr Hudson for Barley £12.15s Spent after at Fishers Coffee House with Thomas Haggar and gave ostler: altogether 2s 6d

To Market, Hertford Lent Fair, on pony. Dined on Steaks at Bulls Head with Smith and Clapham when Dean and Preston and Hanken there. I found steaks, after spent at the Bull: 6d. Gave at Chapmans for pony: 3d. Bought a Cow and a Calf of one Dunn of Whitford for £15. Drove her home myself half past 7 o’clock. Markets cheaper: Very Dull.