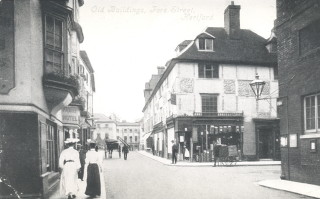 To Hertford May Fair. Sold 2 ponies for £4.13.0. dined at Moses Gillman’s (the) Brewer (at) Hertford by the Lumber House, with Field of Colegreen, Hickman (of) Hertingfordbury, Kent, Bailliff to Bosanquet Esq. (of) Broxbournbury. Gave Maids: 2s. Gave the man for my pony: 6d. Dinner qr Lamb and pies plenty of wine etc. Had cow and calf this fair to sell, which I bought Lent Fair last of one Dunn of Whitford for a Sound Cow,: and gave him £15 as such. But she had lost one quarter of the bagg. I offered for £13, and with calf, 7 weeks old but could not (sell).

To Brocket Hall, Lord Melbourne’s Park, to see the Review of 4 troops of Yeomanry Horse; and the Hitchin Volunteers; and the Hatfield and Welwyn Volunteers about 1000; and Esq Brand’s Riflemen about 120. Reviewed by the Duke of Cambridge, the king’s son. Fine day and many people there, the Hitchin (volunteers) came in wagons and a dray with beer and a wagon full of (things for) Eating.