The Diary of John Carrington - October 1805 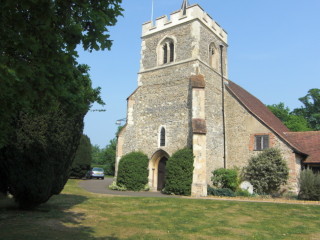 [The summer had passed and the feared invasion had not happened. Napoleon had diverted his army from Boulogne to fight in Austria. For the British, the focus of the war was now at sea. Admiral Nelson was preparing for a battle against the combined fleet of the French and Spanish. The great victory for the British was at Trafalgar on October 21st.. News of this did not reach people in England until 7th November.]

To Lord Cowper’s Feast. Given at Mr Palletts, his steward, at Cole Green on account of his wedding on the 20th of July last, with Lord Melbourne’s only daughter of Brocket Hall. About 64 at dinner. Excellent dinner and fruit of all sorts and plenty of wine and punch. Spencer Cowper and his brother at the head of the table, and Henry Cowper of Tewin Water and Charles Cowper and the Rev Thomas Lloyd, Dr Bradley and the rest, his principal tenants. Toasts (to) the King; Lord and Lady Cowper “Long Life and Happiness”; (to) the branches of the Cowpers. All with 3 times 3. Many others etc…..and good songs with all cheerfulness and tea and supper if (people) chose it. (My) son Will came to fetch me on the pony, home 10 o’clock. Merry!

To Tewin Church. Saw the Sunday School Children of Tewin, Girls and Boys 87 (in all) Lord Cowper gave them all a Good Dinner at the School House and plenty of good drink on account of his marriage. After to Hertford to see the Ware, Hoddesdon and Stanstead Volunteers, who came in yesterday to quarters there…..

Morning to Tewin Water House to take a bill of £21.15.3d of Spencer Cowper, afternoon to Queen Hoo Hall and to Bramfield after Taxes: took land and windows (tax)off Captain Tonyn (of) Green Hall. Spent after at Widow Deardes Grandison Arms 3d