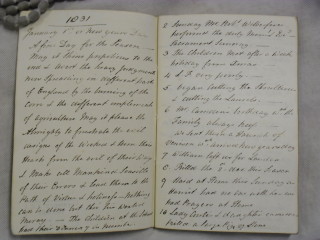 Began painting the Bee House, removed the hives into a temporary House. –

Mary Willison died. She was a good girl when at our school & made a very good servant. – her complaint was a consumption caught from sleeping with a fellow servant – aged 20 – – began sowing the seeds for various kinds of veg ; carrots, onions, parsnips.

The Earl of Liverpool taken dangerously ill on Saturday last. – A great national concern as he is a man of great integrity & has the confidence of the nation. –

L. Fiott came into the great room wheeled in a chair, the first time since October last- a further proof of the mercy of God Almighty! As no one thought she ever would have quitted her chamber. – – It proves the littleness of mortals ideas where the will of God is supreme. –