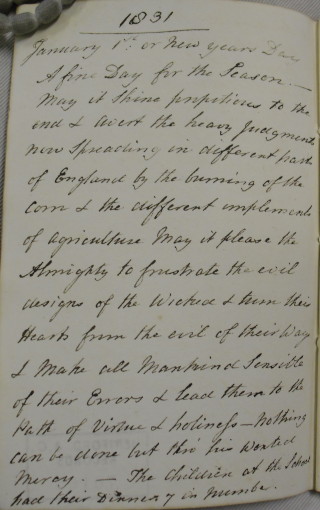 Mr. A:, Sister & Self went to Edgware to see the church & to approve of the new alterations which are proposed to be done by subscription by the Patron Rector & others.

Mr. Lendon’s ball, a very pleasant meeting, all the neighbours & many from London – a very handsome supper was laid out in the Hall where the boys dined &e – The whole was well concluded and went off well.

The Pictures hung up in the great Room. The large Picture frame cleaned – The timber drawn out of the garden & some old yew trees – began laying the manure on the lower five acres. Mr. Lendon came up to consult about the distribution of Mrs. Cross’ legacy of £5, left for Bread to the poor of this Parish. – The Duke of York died at nine o’clock p.m. at the Duke of Rutland’s house.

Or New Years Day. A fine day for the season. – May it shine propitious to the end and avert the heavy judgements now spreading in different parts of England by the burning of the corn & the different implements of agriculture. May it please the Almighty to frustrate the evil designs of the Wicked & turn their hearts from the evil of their ways & make all mankind sensible of their errors & lead them to the Path of Virtue & holiness. – nothing can be done but thro’ his wanted mercy. – The Children at the school had their dinner, 7 in number. –