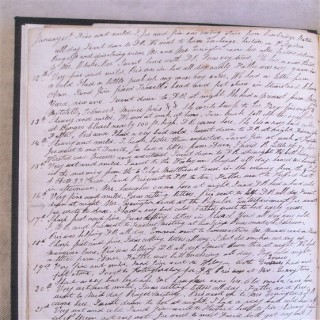 Mr. Foster came to finish our pictures and took two plants in the hot house. – cut cucumbers, 1st time – Wilson took very ill at night with a violent vomiting of blood, which luckily did not continue. It was very alarming to see any one in that state. –

Went down to the school to order the children to attend Mary Willison’s funeral.

Mrs. Ede had a little party at Brice, we could not go – went out in the Carriage through Barnet, Whetstone &e. New bushed the trees on the Common. – – The last time my dear valued Husband went down stairs. He had much difficulty in getting in & out of the carriage.

L. Fiott departed this life after an illness of fourteen months, w’ch she bore with Christian fortitude but w’ch baffl’d the skill of human aid. – She sunk gradually without much suffering apparently & resign’d her breath to the Almighty! whom I trust & hope has rec’d her spirit into his heavenly kingdom – Harriet, Sister, Self & Nicholas were with her to the last & clos’d her eyes I trust in Peace. – – Mrs. Ede & William Fiott arriv’d soon after.